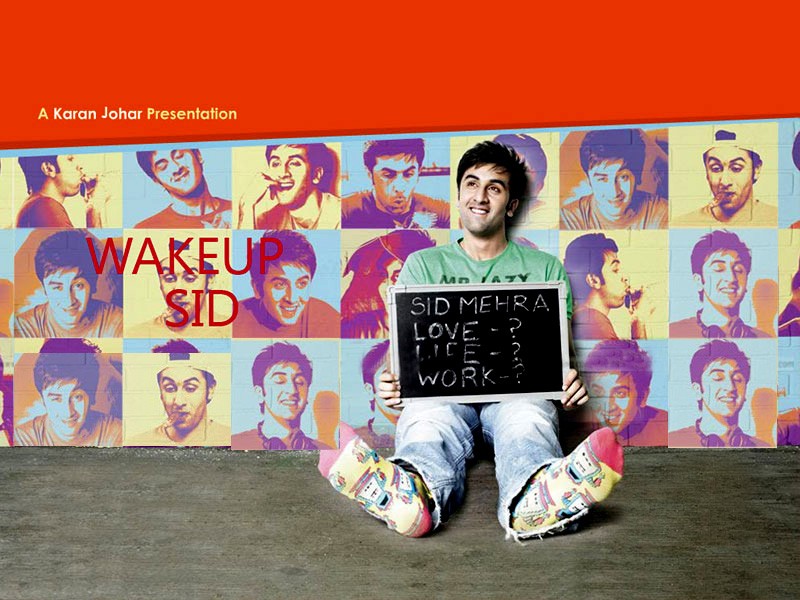 Wake Up Sid is the story of Sidharth Mehra (Ranbir Kapoor), a lazy, unmotivated slacker from Mumbai. He thrives around his two best friends, Rishi (Namit Das) and Laxmi (Shikha Talsania), very rarely communicates with his mother Sarita (Supriya Pathak) and takes his father Ram Mehra (Anupam Kher), and all his hard earned wealth for granted. Aisha Bannerjee (Konkona Sen Sharma), an aspiring writer from Calcutta, comes to Bombay to realize her dreams as a writer. Despite their contrasting personalities, Sid becomes Aisha’s first friend in the city. A series of circumstances and events compel him to take stock of his life and take a hard look at himself.

The movie is supposed to be about Sid realizing his mistakes and making a turn around. But the turn around is too easy and he does not struggle at all. He gets a job and its all fairy tale. Wish life was that easy. Aisha gets a flat and is able to spend on all the furniture and decoration when she has not landed a job yet. Just after the scene where Sid lashes out at Aisha that she always considers him a kid and he has to prove himself himself over and over the ending seems such a cop out.

Ranbhir is excellent as Sid and gives a very natural performance. His dumb or bewildered expressions in some scenes are excellent. Konkona’s role gives a sense of deja vu. Her role is very similar to her role in Luck By Chance. Even some scenes of her look like they are from that movie. She seems to be doing this independent career woman role in a lot of movies like Luck By Chance, Page 3 and Life in a Metro. She is annoying in scenes where she is yelling at Sid. Anupam Kher is very restrained as the dad and Supriya Pathak is very good as the loving mom. Namit Das is ok. Shikha Talsania is very good as the fat friend. The girl who plays Tanya is pretty and acts well. Rahul Khanna is ok but the role seems similar to his Love Aaj Kal role.

Music by Shankar-Ehsaan-Loy is good with songs like “Wake Up Sid”, “Kya Karoon” and “Aaj Kal Zindagi”. Clinton Cerajo sings “Kya Karoon” well but his accent is bad with him pronouncing “Thoda Thoda” as “Toda Toda”. Background music is annoying with the constant “Wake Up, Wake Up”. The good thing about the songs is that there is no lip syncing. Cinematography by Anil Mehta is good.

Ayan Mukerji’s direction is very good in some scenes but the movie does seem boring at places. The background music does not help in those scenes. The movie borrows a lot from Farhan Akhtar’s Dil Chahta Hai and Lakshya and also looks like those movies. But what helps this movie is that Ranbhir is much younger than what Aamir or Hrithik were while doing those movies. Hrithik was good in the army parts but did not look his part as the confused youngster. All in all, the movie is watchable if one can put up with the slower parts.