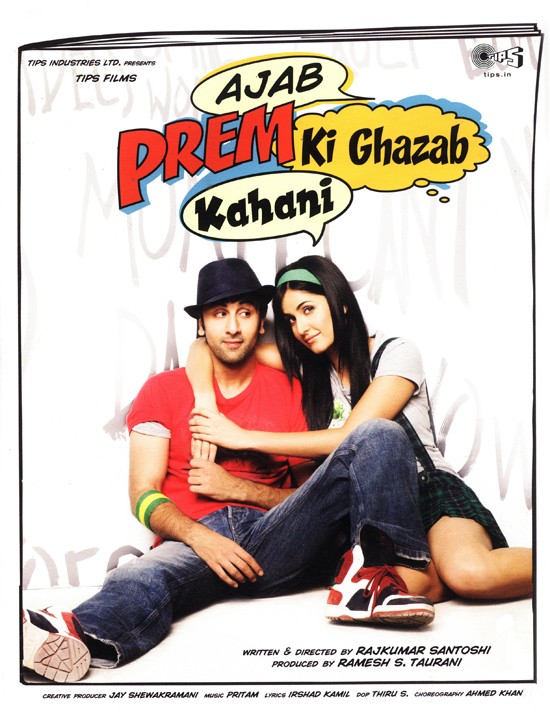 Prem (Ranbir Kapoor), the president of Happy club, is always trying to make everyone happy. After a initial misunderstanding he becomes good friends with Jenny (Katrina Kaif) and falls in love with her. Jenny’s parents want her to marry some rich guy but she is in love with Rahul (Upen Patel) and his politician father (Govind Namdeo) is against the marriage. Prem decides to help her elope and there is a sub plot involving a Don who is after the politician. The rest of the movie is about whether Jenny will realize that Prem is the right one for her.

The movie tries very hard to be another Andaz Apna Apna. Now even Andaz Apna Apna was silly but what was great about that movie was that the dialogues were excellent and had some great performances from Aamir, Salman and Paresh Rawal. Here the dialogues aren’t that funny. Except for a couple of scenes the jokes fall flat. The final fight is very much similar to Andaz Apna Apna’s final fight scene. Whereas Andaz Apna Apna never got serious here the movie delves into melodrama often with a clichéd track of Jenny being a step daughter.

Ranbhir is very good as Prem. He is what makes the movie watchable with his earnestness and sincerity. The role is somewhat similar to his role in Saawariya and Wake Up Sid. He needs to do something different now as he is getting typecast. Katrina looks gorgeous but cannot act as usual and her British accent is such a turn off. Upen Patel is atrocious. Darshan Jariwala and Smita Jaykar are good. Govind Namdeo is his usual self.

Music by Pritam is ok with ‘Tera Hona Laga Hoon’ being the best. Choreography by Ahmed Khan is very good and Ranbhir dances really well. Art direction is not that good as one can easily make out that they are sets.

Rajkumar Santoshi’s direction is good in some scenes but the movie has a 90’s hangover. The scenes involving the friends who are always helping or pulling his leg is so 90s ‘Barsaat’. The whole movie is shot on sets and makes it look fake. The movie drags on in the second half with unnecessary sub plots and the movie is neither Ajab nor Ghazab.