Movies You Watched This Month – September 2013 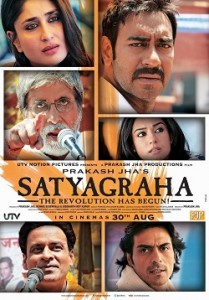 Official Synopsis: Satyagraha is the story of a son who yearns for a father. Of a father, who grieves for his lost son. Of a young woman who fights so hard with life that she has forgotten to love. Of an ambitious rabble-rouser, for whom action is the knee-jerk mantra. It is the story of how these four discover one another, and come together to raise hell, shaking the powers that be to their very roots! But, Satyagraha is also the story of an influential power-hungry despot who will stop at nothing to destroy them. Satyagraha- The revolution has begun!

Amitabh acts well as the idealistic angry old man but his role is similar to his role from Aarakshan. In some scenes he says lines like he does on KBC. Ajay was good but his character was all over the place – a opportunistic businessman one moment, a person caring for the father of his friend and a politician at another moment. Kareena acts well and even copies Barkha in some scenes but her character is given unnecessary importance and is shown with too much make up. She is supposed to be a reporter but she is hanging at Amitabh’s house and attending political meetings along with Ajay. Manoj Bajpai is good this time as the politician. He does not overact like he did the last time in Aarakshan. Arjun Rampal is good but could not understand why he gets involved and what was his motive/objective. Amrita Rao was ok.

Prakash Jha’s direction is bad. Instead of trying to make a good movie using the real life incidents and people he makes one more cliched political movie similar to his previous movie Aarakshan. The movie is way too long and leaves one bored and exasperated by the end.