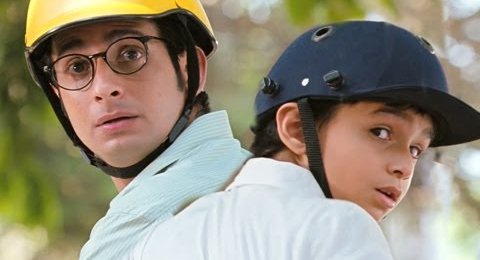 Like the Munnabhai movies and 3 Idiots with which it shares its DNA, Ferrari Ki Sawaari is a well-intentioned film with its heart positioned firmly in the right place. And yet, this simple-minded tale about an ordinary family chasing an extraordinary dream never quite soars.

Sharman Joshi is Rusy Deboo, a government clerk who’s honest to a fault. When he accidentally jumps a traffic light, he searches for the nearest police post and insists on paying a fine. Rusy lives with his crabby father Behram (Boman Irani), a former cricketer who never made it to the big league, and his 12-year-old motherless son Kayo (Ritvik Sahore), a promising batsman who aspires to play like his idol Sachin Tendulkar.

When Kayo is selected for a prestigious training camp at Lords, Rusy must come up with the fee that’s way beyond his modest means. Unable to get a loan, the only option seems to involve stealing Tendulkar’s Ferrari for a wedding planner friend.

Starting off nicely as a portrait of a middle-class Parsi home, Ferrari Ki Sawaari coasts along comfortably, delivering clean laughs punctuated by occasional moist-eye moments. But from the moment Rusy makes off with the master blaster’s hot-wheels, the film seems to abandon all sense of logic, and subsequently sinks into a sludge of melodrama.

The business with a local corporator and his witless soon-to-be-married son goes on way too long, and a pre-climax scene in which Rusy appeals to citizens on live television when Kayo goes missing is so over-the-top it makes you cringe. More engaging is a comic track involving Tendulkar’s desperate housekeeper and his security guard who must trace the stolen Ferrari before their boss gets home.

Co-written and directed by Rajesh Mapuskar, formerly an assistant to Rajkumar Hirani, Ferrari Ki Sawaari is competently assembled, but never quite straddles the real and the exaggerated as effortlessly as Hirani’s films have. Still there’s much pleasure to be had in the performances here. Seema Bhargava is terrific as the feisty wedding planner who badly needs the Ferrari, and Paresh Rawal strikes the perfect note as an oily cricket administrator who the family approaches for a favor. Of the leads, Sharman Joshi makes Rusy wholly believable despite being written as a mild-mannered, too-good-to-be-true fellow. But it’s Ritvik Sahore as the confident but considerate Kayo, and particularly Boman Irani as the wronged, disillusioned grump who brings pathos to this film.

I’m going with two-and-a-half out of five for director Rajesh Mapuskar’s Ferrari Ki Sawaari. A little shorter, a little more subtle, this one could’ve zoomed.