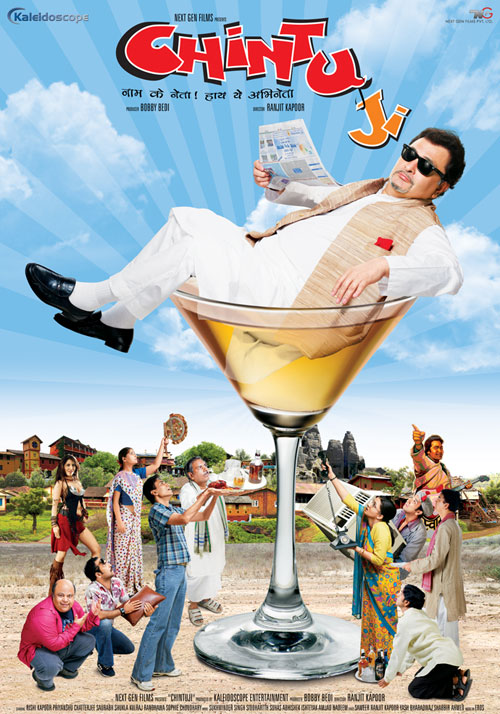 Chintu Ji is a shameless copy of the 1942 movie “The Man Who Came to Dinner” which was based on a play of the same name. Hadbahedi, a small honest town competes for resources and recognition with a neighboring corrupt town, Triphala. Hadbahedians believe that they have been totally neglected by the state and seek an identity. They are led in this endeavor, by Arun (Priyanshu Chatterjee), the local newspaper’s proprietor. They discover that Rishi/Chintu Kapoor was actually born in their village 55 years back. A grand welcome follows. Chintu arrives with his PR Devika Malhotra (Kulraj Randhawa) and treats the innocent people of Hadbahedi with contempt.

The story is just ridiculous with a town where every one is honest and another where every one is corrupt. Scenes are so amateurishly written that they are a joke. Rishi Kapoor is pissed off every time and his PR advises him openly (Are the people blind not to see this?). One moment Priyanshu is yelling at Rishi and in the next scene he is crying asking for forgiveness. There is a whole foreigner track, a film shooting, a terrorism angle thrown just whatever the writer/director (Ranjit Kapoor) can come up with.

Rishi Kapoor plays himself. Why did Rishi Kapoor let himself be used in such a bad way? He is shown as nursing political ambitions and being snobbish and rude. Priyanshu cannot act and does not deserve to be the lead. Kulraj cannot act either. She looks good but should stick to TV serials. Saurabh Shukla is ok and Annu Kapoor is ok in a bit role.

Cinematography is horrible. The movie looks like a stage play or TV serial and a bad one at that with cheap sets. Ranjit Kapoor’s direction is horrible and there is no sense whatever. He shamelessly rips off from “The Man Who Came to Dinner” and credits himself as the writer. What was originally set in a house is set at the town level. The movie is just nonsense.