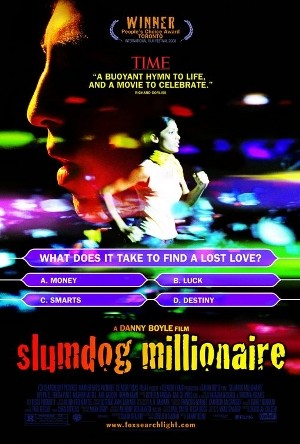 Slumdog Millionaire is definitely Oscar worthy. The movie is at its heart a beautiful love story set against the backdrop of slums and the popular TV show Who wants to be a Millionaire. Jamal Malik (Dev Patel) is a contestant on the indian version of Who Wants to Be a Millionaire, who has made it to the final question for 20 million rupees. Prem (Anil Kapoor), the host of the show, cannot accept that a chaiwalla who grew up in the slums can get that far, and accuses him of cheating and has him handed over to the cops. The cops (Irrfan Khan and Saurabh Shukla) interrogate him and Jamal explains how he knew the answers to the questions.

There are a series of flashbacks for each answer. The movie begins with the kids being chased by a cop for playing and we are shown the small lanes and bylanes of the slums with bird eye views. Then there’s a scene how the young Jamal (Ayush Mahesh Khedekar) gets the autograph of Amitabh Bachchan. The scene is just brilliant but some may like the scene and a lot may hate it. Then we are shown how his mother died during the Hindu-Muslim riots and how he and his elder brother Salim (Azharuddin Mohammed Ismail) befriended Latika (Rubiana Ali). Salim saves Jamal from being blinded by Maman (Ankur Vikal) and they escape but Latika gets left behind. The brothers live on trains selling goods.

The teenage Jamal (now played by Tanay Chheda), suddenly becomes a tour guide. His explanation for Mumtaz’s death is just hilarious. His brother Salim (now played by Ashutosh Lobo Gajiwala) has become a pickpocket. They return to Mumbai to find Latika in a brothel and rescue her. Salim kills Maman in the process and becomes a goon for Maman’s rival Javed (Mahesh Manjrekar). Jamal then loses Latika to Salim.

The grown up Jamal (played by Dev Patel), serves tea at a call centre of a cell phone company. He gets in touch with Salim and is able to locate Latika, who is now living with Javed. Latika comes to the train station to meet Jamal but is captured by Salim and his goons. Jamal in his quest to reach her gets on the TV show as she likes to watch it. Does he win the TV show and can he get back with her is what the rest of the movie is about.

Ayush Mahesh Khedekar who plays the youngest Jamal is the best Jamal in the movie. He is very cute and his expressions are wonderful. He acts brilliantly and his dialogues are also very well written. He displays such innocence when he is taken to be blinded and he is adorable asking for 50 rupees for singing a bhajan saying he is a professional. Azharuddin Mohammed Ismail who plays the youngest Salim and Rubina Ali (the youngest Latika) are also pretty good. Tanay Chheda, the kid fom Taare Zameen Par, who plays the middle Jamal and Ashutosh Lobo Gajiwala (the middle Salim) are decent. Dev Patel, who plays the grown up Jamal, does’nt look that Indian and he has an accent. In some scenes like the 1000 rupee question scene his mannerisms also dont look Indian. The director should have looked more for an Indian guy to play this part. Frieda Pinto is pretty good as the grown up Latika. Anil Kapoor is very good as the condescending and jealous host. Irrfan Khan and Saurabh Shukla are adequate. Mahesh Manjrekar does his same act as the don.

A R Rahman’s background music and Anthony Dod Mantle’s cinematography take the movie to a completely different level. This is definitely A R Rahman’s best work and the music in so varied with hip hop, pop and classical music. He will definitely win the Oscar for Best Original Score and Best Original Song. ‘O Saya’ and ‘Jai Ho’ are both equally good though Jai Ho has beautiful lyrics by India’s best lyricist Gulzar and Gulzar deserves an Oscar for his lyrics. The song is brilliantly picturized with the end credits rolling. Anthony Dod Mantle’s cinematography is brilliant and he will definitely win the Oscar for Best Cinematography.

The slum scenes are brilliantly shot be it the riots scene, or the school scene or the chase scene or the final scenes. The train scenes are absolutely brilliant especially the roti stealing scene. Now, the flaws. Some of the explanations for the answers are too contrived like how would Jamal know who wrote the bhajan or how would a blind little kid know who is on the hundred dollar bill or how would a teenager know who invented the gun. The movie starts off in Hindi and then in the second phase Jamal and Salim and everybody else starts speaking in english which suddenly seems contrived as the kids did not go to school that much. The excuse for it is that the movie is made for a world audience and in that case they should have had the youngest kids speak in english too for continuity sake.

The movie surely has its flaws but can be overlooked in the larger context. Danny Boyle’s direction is brilliant and he has captured Mumbai and the Indian culture and life pretty well and needs to be commended for that. The movie may infact win the Best Picture and Best Director award. A R Rahman and Anthony Dod Mantle will definitely win Oscars.