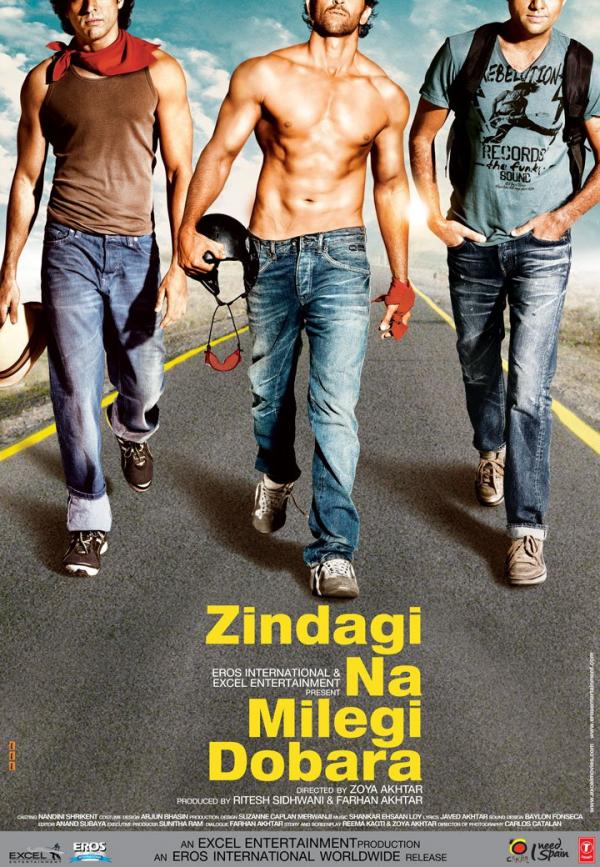 Kabir (Abhay Deol) is engaged to Natasha (Kalki). He wants to go on an extended bachelor party – a 3 week road trip with Imraan (Farhan Akhtar) and Arjun (Hrithik Roshan)- his 2 best friends since school. The only problem is Arjun is too tied up with work. After much emotional blackmail and cajoling the boys set off on a journey they were meant to take 4 years ago. A fantasy holiday they had planned to take after college but never happened. A road trip where each one gets to do the ultimate sport of his choice and the other 2 just have to do it with him. They set off on a holiday that will change their lives forever.

It seems somewhat implausible in how easily Natasha can visit them in the midst of their trip. Laila suddenly reappears in the movie out of nowhere. There are scenes like Arjun video chatting with some Japanese guy or Kabir doing a video chat with Natasha sitting in the middle of nowhere with excellent internet connectivity. The poetry (written by Javed Akhtar) that Imran recites is not that good and doesn’t gel well in the movie. It would have been better if the movie had only a couple of minutes of each song rather than the whole song.

The movie initially looks like its Dil Chahta Hai with three friends and two of them having a problem with each other. Even Natasha’s character seems like it is an extended version of Suchitra Pillai’s character. But as the story progresses there is no resemblance to Dil Chahta Hai. It is a road movie and it basically deals with each character facing their worst fear and letting go of their emotional baggage.

Screenplay by Reema Kagti and Zoya Akhtar is very good. Dialogues by Farhan Akhtar are very good. Cinematography by Carlos Catalan is excellent and he captures Spain beautifully. Music by Shankar Ehsan Loy is not that good and the movie needed better music. Lyrics by Javed Akhtar are disappointing as one expects brilliant lyrics from him for all songs. Khaabon Ke Parinday is the best song of the movie. It has great lyrics by Javed Akhtar and beautifully sung by Alyssa Mendonsa and Mohit Chauhan. The rest of the songs range from mediocre to strictly ok.

Hrithik is very good as Arjun whether as the money minded workaholic and uptight Arjun in the initial parts or as the cool guy in the later parts. He seems a bit unnatural in a couple of scenes where he is speaking in English. Farhan Akhtar is excellent whether as the goofy guy who is always trying to be funny or as the one who finally comes to terms with his parentage. He is excellent in the scene with Naseer. Abhay gives a very natural performance as Kabir and Kalki is good as the possessive girl friend. Katrina is ok. Naseer is very good in a cameo.

Zoya Akhtar’s direction is very good. The first half is extremely entertaining with Farhan’s jokes and the camaraderie between the friends. The second half seems a bit slow paced but is much more profound. All in all its a excellent movie and is one of the best movies of the year.