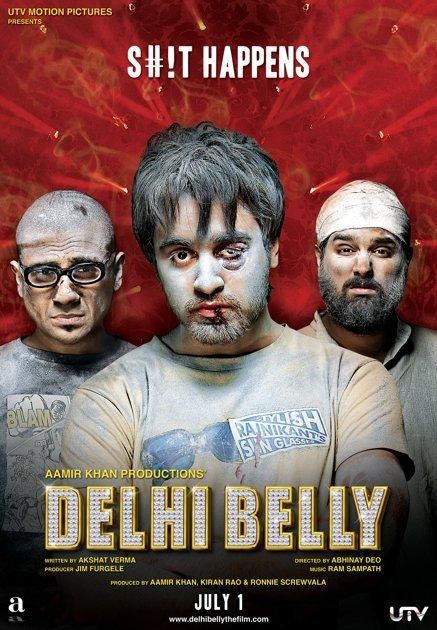 Tashi (Imran), Arup (Vir Das) and Nitin (Kunal Roy Kapoor) – flatmates, buddies and partners in crime. Tashi is to get married in a month but still doesn’t know if his fiancé is THE ONE! Arup can’t make up his mind who he wants to kill first – his girlfriend who has just dumped him or his stupid, annoying boss. And Nitin is about to discover that eating delicious tandoori chicken off a street vendor is going to give him the worst case of Delhi Belly he’s ever known! Three regular blokes, living the regular life EXCEPT for one small detail – they are on the hit list of one of the world’s deadliest crime syndicates. Will they be able to get away before the shit hits the roof and it comes crashing down?

Tashi’s fiance (Shenaz) is an air hostess. It seems odd that she would have a boyfriend like Tashi who lives in such a miserable place and that her parents would be so nice to not only approve their marriage but also buy him a car. In what is a 70s bit she is used by the goons to transfer a package which contains diamonds. It also seems odd that Nitin seems to be in fine spirit for the most part for a guy who is suffering from diarrhea.

The plot is nothing new and the movie is inspired by Guy Ritchie movies. The final shootout scene is inspired from the movie True Romance. The movie 99 starring Kunal Khemu also had the final scene set in a hotel where it all comes together and it was very smartly done while the one in Delhi Belly seems somewhat lame. There is a scene copied from the TV show Seinfeld too where a thing thrown from the hotel window falls on someone.

Music by Ram Sampath is pretty good. The songs are used in the background for the most part. Background music is decent and a theme that plays whenever Vijay Raaz is on screen is very good. Cinematography is decent. Jaa Chudail is choreographed very well by Farah Khan. The Aamir item song is also well choreographed with Aamir imitating Mithun pretty well. It however should have been in the movie when Arup goes to watch the movie rather than at the end. DK Bose song would have made more sense at the end.

Imran is strictly ok. There are many places where he seems wooden. Vir Das is decent and Kunal is pretty good. Shenaz is her usual self and Poorna seems miscast for the part. Vijay Raaz is very good though one feels that his character should have been developed better.

Abhinav Deo’s direction is ok. The movie has a lot of cuss words and a couple of scenes that might be shocking for some. The movie is not that funny except for a few scenes unless one finds fart scenes or someone cussing funny. It feels quite boring for the first one hour. It picks up pace in the last half hour and that kind of salvages the movie.