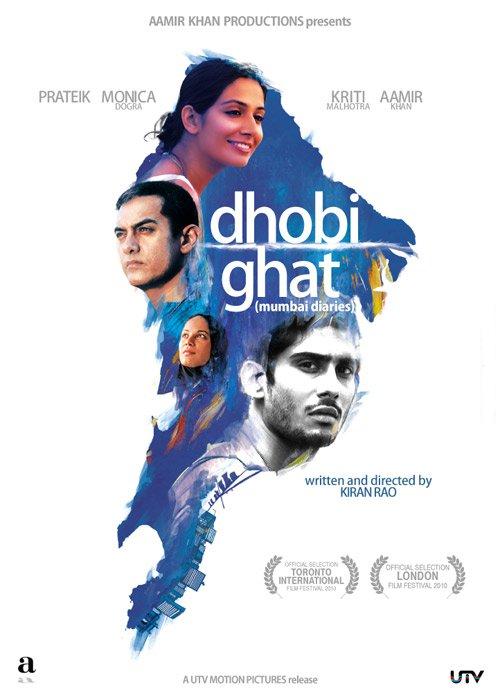 Dhobi Ghat (Mumbai Diaries) is the story of four people from very different backgrounds. Shai (Monica Dogra), an investment banker is on a sabbatical in Mumbai and meets Arun (Aamir Khan), a painter. They spend a night together but Arun is not interested in a relationship. Both share a common dhobi Munna (Prateik), who aspires to be an actor but moonlights as a rat killer and is a gigolo on the side. He agrees to show her the ‘real’ city in exchange for her shooting his portfolio. Arun moves into a new apartment and finds some tapes left by the previous tenant Yasmin (Kriti Malhotra) and is enamored with her.

It is funny that Shai who is so affluent and who has a maid cannot afford a washing machine and uses a dhobi. It also seems incredulous that this pretty NRI continues to stalk this painter. Even for a guy doing two jobs it seems a bit far-fetched that Munna is wearing shorts and clothes which one does not necessarily associate with a dhobi (unless its being hinted that he is wearing his client’s clothes) and he and his friends would be watching the movie at the same theater as Shai. He also seems to have all the time in the world to show Shai around the city and hang out with his friend despite working two jobs.

Yasmin seems to go around shooting with a camcorder and mouthing philosophy which seems so unbecoming of a small town girl. The dialogues about Bakrid also seem pretty hollow – they would be more apt coming from a PETA spokesperson than from someone like Yasmin. She has no problems making meat dishes for her husband but cannot go to a relative’s place because she does not want to see the goat being slaughtered. She says she feels bad for having to sacrifice something they raise which is not true and it is not like everyone has to be present at the sacrifice.

It also seems stupid that Arun would pay others to find about Yasmin when he still has tapes of her left to watch – how about watching the last tape in the series (they are marked Pahli tape & so on) or may be fast forwarding through all of them. And how exactly do these tapes get left around – why does Yasmin not send these tapes to her brother and if she indeed did what is suggested in the movie there is no way that those tapes would still be lying around in that house. If the lady next door was shown to be friendly to Yasmin then her current silence would have had greater effect.

Music by Gustavo Santoalalla is good especially the theme music but the movie does not have any background music for the most part. Cinematography by Tushar Kanti Ray is very good. Still Photography by Jyothika Jain is good and the final painting by Ravi Mandlik is beautiful.

Prateik is natural and acts very well except in some scenes like the first one where he is praising Johnny Lever and it seems fake. His voice is a bit whiny in some scenes like in the scene where he asks Shai if she even knows anything about doing portfolio. Monica Dogra acts well as Shai though her accent seems to be all over the place – she’s saying mum (British Accent) the first time, mom at another time and Maa at another time. Kriti Malhotra acts well as Yasmin. Aamir’s acting is labored and seems unnatural compared to the natural performances of the other three leads. He just does not seem comfortable speaking the English dialogues. He does get the acting moment in the climax and acts well in that scene.

Kiran Rao’s direction is good in capturing the subtle moments but not so good when it comes to the larger picture. There have been movies like this even in India (Life in a Metro, Mumbai Meri Jaan and LSD) and the different plots were interconnected in a much better manner. She also seems to want to make a point about the north Indians with Munna and Yasmin. The movie is basically an art film and is boring for the most part and pretentious. It is kind of salvaged somewhat because of the fine performances of the three main leads, cinematography and the spooky twist. All in all it’s an average fare.