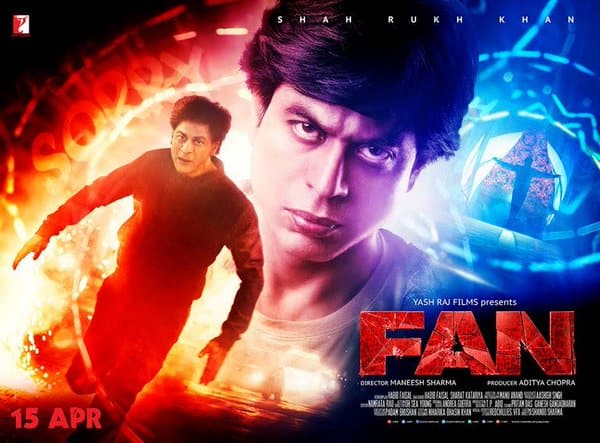 Does it sound preposterous or exaggerated? Not really! We’ve read/watched news — even movies — involving obsessive fans [of sportsmen and movie stars], who undergo behavioral changes and traverse paths, from being passionate to getting psychotic. Director Maneesh Sharma and screenplay writer Habib Faisal grab anecdotes from reality and serve an attention-grabbing premise on the plate, giving an altogether new spin to obsession and fanaticism. In FAN, the fan not only imitates his idol, but also resembles him looks-wise. Therein lies the difference… and the challenge.

Now to the pertinent question: Is FAN a freshly-packaged, contemporary version of Yash Raj’s cult classic DARR, with modifications of course? Or does FAN seek inspiration from Hollywood [remember the Robert De Niro-Wesley Snipes movie THE FAN; 1996]? Maneesh and Faisal may’ve used Bollywood as the template to narrate the story, but FAN isn’t about movies alone, since it brings to light the behavior of a fanatic who’s obsessed with the superstar.

FAN stands on two factors primarily: a fascinating plot that’s fleshed out delightfully for most parts and a powerhouse act by SRK, who returns as an antagonist after more than two decades [BAAZIGAR – 1993, DARR – 1993 and ANJAAM – 1994]. More on SRK later… However, the flip side is that the writing, especially in the post-interval portions, moves to an unrealistic zone, with a few episodes looking far-fetched. And that, frankly, robs the sheen after you’ve watched a brilliant first half.

First, the succinct plotline… FAN narrates the story of Gaurav, an over-obsessive fan, whose life revolves around superstar Aryan. In his desire to meet his idol, Gaurav embarks on a journey to Mumbai. However, his interaction with the man he hero-worships and idolizes fails to meet his expectations. Resultantly, Gaurav decides to get nasty and malicious.

Let’s not beat around the bush. FAN may not be the most original piece of work [moviegoers are bound to draw parallels with other films], but it packs light moments, emotions, tension and conflict in an unmistakably entertaining format. The plot twists in the first hour and a couple of episodes post-interval make FAN a compelling watch. The faceoff between the superstar and the viscerally dangerous fan is built on a strong edifice and definitely merits special mention.

Nonetheless, FAN is not without its share of flaws. Just when you thought that the film was moving on the right track, a few episodes in the second hour that abound in cinematic liberties make you wonder, was it necessary? You may argue, cinematic liberties are a commonality in Bollywood movies, but when you try to be as real as possible [in the first half], getting unreal all of a sudden catches you by complete surprise… or should I say, shock?

After attempting a couple of delectable rom-coms, Maneesh steps into an unexplored territory with FAN. He knows the craft and that’s evident in a number of skillfully executed sequences. What’s bothersome is that Faisal resorts to the customary tropes and standard techniques after a point. However, despite the blemishes, the writer delivers enough nail-biting moments as the cat-and-mouse tension between Aryan and Gaurav moves to an exceptional finale. Faisal along with Sharat Katariya also garnish the dialogue wonderfully, soaking the lines in realism and punctuating them beautifully in the dramatic sequences.

Casting SRK in a real-life part [as the superstar] makes the thriller bona fide, but, for me, it’s the intimidating fan that’s the driving force of the enterprise. It’s a feeling of déjà vu as SRK enacts a sinister and obsessive character after a hiatus — a part that catapulted him to superstardom in the 1990s. Nonetheless, the obsessive Gaurav is unlike Ajay/Vicky of BAAZIGAR or Rahul of DARR and so is SRK’s interpretation this time. What remains unchanged, however, is your reaction once the movie concludes. You carry home the antagonist, not the protagonist. If SRK is charming and believable as the superstar, he delivers a sterling performance as the fan with vengeance on his mind.

There’s no place for the mandatory song-and-dance routine in FAN, since the narrative relies completely on drama and tension. The sole track [‘Jabra’], a rhythmic, foot-tapping song that’s filmed energetically, is missing in the film.

On the whole, FAN has a brilliant first half, but loses track in the second hour, only to pick up again towards the pre-climax. The writing should’ve been tighter, while the absence of music [it’s a songless film!] may also prove a stumbling block, but what works, and works big time, is the terrific act by SRK as the fan. And that’s enough reason for you to watch this thriller!