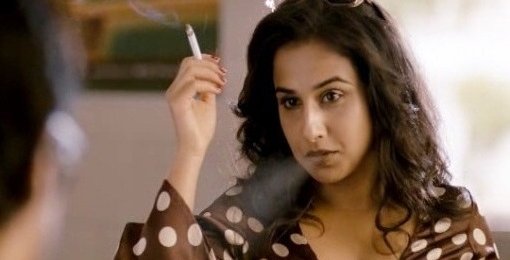 “Vidya Balan goes where few have gone before, putting it all out there, literally, for the sake of her art. Pity it’s for a film as unremarkable as The Dirty Picture. At one point in this movie, her character, a titillating dancing star of the 80s, says there are only three ingredients in a film that can guarantee its success: “Entertainment, entertainment, and entertainment.” It’s a point director Milan Luthria and his writer Rajat Arora seem determined to beat into our heads. For The Dirty Picture seems to have been made specifically to shock you.

All those lured in solely by the promise of skin-show are unlikely to complain. Yet, despite its masala scenes, heavy dialoguebaazi and liberal sexual innuendo, in the final analysis, this film is far from perfect. The Dirty Picture takes an unconventional idea and bakes it in a predictable oven.

What it suffers most from, unfortunately, is lazy writing. With a plot straight out of a Madhur Bhandarkar film, and a screenplay that follows a familiar graph, The Dirty Picture offers a superficial, simplistic view of the seamy, exploitative side of the 80s film industry. There is little attempt to treat this material with sensitivity and depth. No sir, this film unfolds as a series of provocative scenes strung together on the strength of their sexually loaded dialogues.”

“Despite repeated testimonials on the part of its makers that their inspiration isn’t Silk Smitha, The Dirty Picture still comes across as a thinly-veiled life-story of the famous South Indian screen siren. In typical filmi fashion, the story opens with Reshma, a village girl, running away to Madras to realize her impossible dreams. Reshma is a Plain Jane, but she wants to be a star. Grabbing an opportunity with both hands, Reshma gyrates seductively in her first break before the camera. She acquires the name Silk, falls into an affair with a much-married superstar, and a siren is born. Her downfall, incidentally, is as quick as her rise – Silk’s recklessness makes her overdose on a cocktail of disastrous love affairs, alcohol, bad debts and excess.

Over the course of the film’s 2 hours 20 minutes running time, we’re introduced to the men in Silk’s life. Naseeruddin Shah is expectedly first-rate as the egotistical, ageing superstar Suryakant, who exploits Silk, then cuts her off ruthlessly. Heartbroken, she takes up with his younger brother Ramakant, played by Tusshar Kapoor. This character seems forced into the plot, and Tusshar is miscast, as is evident by a bizarrely comical dance he breaks into, straight out of those Golmaal movies. Emraan Hashmi is appropriately restrained as Abraham, a director who believes in film as art, and who abhors the idea of inserting steamy numbers in his movie to lure in the crowds. His hatred for Silk seems misplaced, and so does his sudden change of heart…and yet he has the most interesting dynamic with the siren. Alas, it’s too little too late.

Despite the film’s shortcomings, you go the distance for Vidya Balan, who’s riveting as Silk. She plays the part with gusto – it’s a rare performance, one that’s this brave and uninhibited. Vidya pushes the envelope in the way she bares herself both physically and emotionally. Watch how she stops traffic by dancing on the bonnet of a car to disrupt a party she isn’t invited to, or the scene in which she saucily lounges naked in a bathtub while giving an interview to a journalist. Vidya’s lack of vanity and complete surrender to her craft reinforces why she’s miles ahead of her contemporaries.

Alas, one can’t muster up the same enthusiasm for the film. For although The Dirty Picture is nicely shot and comes with a foot-tapping score from Vishal-Shekhar, the makers seem too preoccupied with the style and the fashion of those times. The film is refreshingly judgment-free, but leaves you confused about your feelings for Silk in the end – is she a victim, or just someone who made her bed and had to lay in it?

I’m going with two out of five for the film, and an additional one for Vidya Balan alone, which makes it three out of five for The Dirty Picture. It’s an average film made eminently watchable by its courageous star. Go on, give her the awards already!”