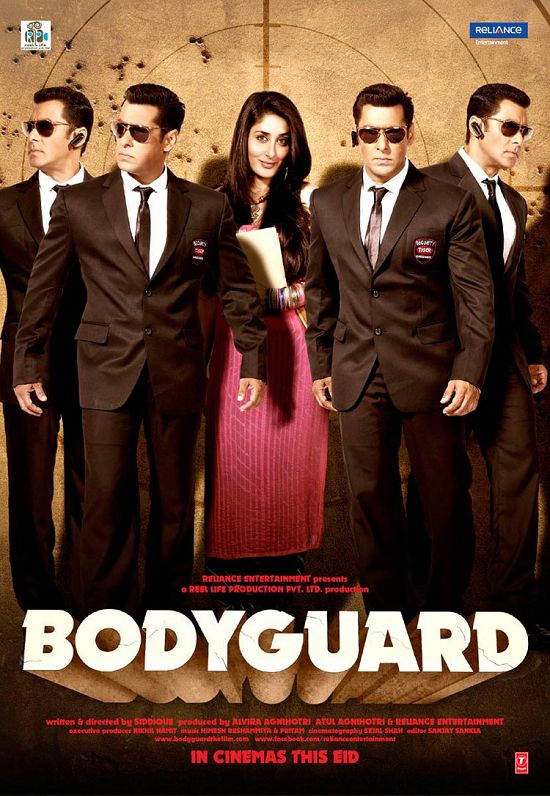 Lovely Singh (Salman Khan) is a Bodyguard who is summoned for an assignment of guarding Divya (Kareena), the daughter of Sartaj Rana (Raj Babbar), a business tycoon. Lovely Singh accompanies her to her campus, but ends up rubbing her the wrong way. To throw him off-track and get him out of the way, she comes up with a ‘master-plan’- that of trapping him in a fake love affair. She starts calling him, expressing her ‘feelings’ in no uncertain terms. But once she succeeds in doing so but things take an unexpected turn when she learns a few things about Lovely Singh. And she soon finds herself trapped in a dilemma that she’s unable to resolve! And with her, soon enough, Lovely Singh finds himself ensnared in a web of lies, trickery and deceit!

Salman makes his entry with his now customary song. He follows it up by jumping in the air from one train to another and an over the top fight sequence in the now customary warehouse. There is a lot of silly comedy involving a fat guy Tsunami (Rajat Rawail) and a midget none of which is funny. There is the now customary ring tone too. Divya starts to call Lovely to throw him offtrack but falls in love as is customary in love stories.

There is another over the top fight sequence with Salman fighting even after being blinded which is inspired/copied from the movie Bloodsport which was already copied in Jigar. There is the now customary shirt being ripped off scene too after being sprayed with the now customary water hose. The movie then becomes a Kuch Kuch Hota Hai with the two friends, one friend marrying the hero and a boy (instead of girl) who reads a diary instead of letters. There is a train scene copied from DDLJ too.

Dialogues are bad. They are not funny during the supposedly comic scenes and the one liners just don’t work. Cinematography by Sejal Shah is ok. Music by Himesh is decent. The title song is catchy but has bad lyrics. The song Teri Meri inspired by a Romanian Christmas carol song is good. The song I Love You is messed up by the singer Ash King’s bad vocals. The background music by Sandeep Shirodkar is nothing great to write about. Vijayan’s stunts are way over the top.

Salman seems earnest in some scenes and he tries to use his charm to pull off some nonsensical scenes. Kareena looks gorgeous and acts well. Hazel is ok. Raj Babbar is decent. Mahesh Manjrekar is wasted and Aditya Pancholi is good in a cameo.

Siddique’s direction is bad. The movie tries to put in some comedy (which is not funny), some action (to appease the Salman fans) and a love story which is copied from Kuch Kuch Hota Hai. Its a mediocre film made somewhat watchable due to Salman and Kareena.