This is a slightly edited version of a review that I wrote a few years ago. 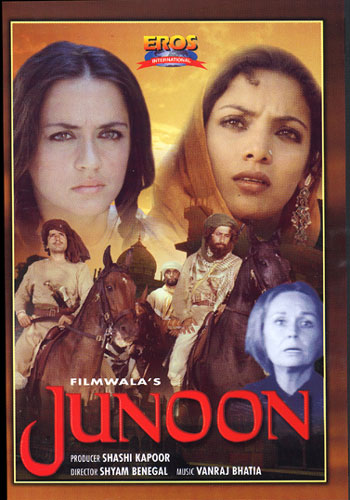 Junoon, based on Ruskin Bond’s novel A Flight of Pigeonsis the story of Javed Khan (Shashi Kapoor), a pathan, who is smitten by Ruth (Nafisa Ali), a British girl and his obsession for her. Ruth’s father is killed by Sarfraz Khan (Naseeruddin Shah), an indian revolutionary and brother-in-law of Javed. Ruth, her mother and grandmother are all kidnapped by Javed Khan from a money lender’s home where they had taken refuge. Javed Khan, wants to marry Ruth and take her as a second wife but her mother Mariam opposes the marriage by laying out a condition. The rest of the movie is whether Javed keeps his word or will his obsession get the better of him.

The movie is basically a love story set against the backdrop of the Indian mutiny. It is a movie about relationships between people of different cultures, the prejudice, the hatred, love and obsession. Javed is obsessed with Ruth while Sarfraz is obsessed with driving the British out. Mariam is obsessed with protecting her daughter whereas Firdaus is obsessed with her jealousy and anger towards Ruth and her family.

Some scenes are excellent like the one where Ruth’s father is killed by Sarfraz or the scenes where Firdaus displays her resistance to Javed’s second marriage and her jealousy of Ruth. Some scenes stand out like the scene where Mariam lays out the condition for her daughter’s marriage, the silent war between Javed and Mariam and the scenes where Ruth starts to fall for Javed. The best scene of the movie is the one where Sarfraz attacks the pigeons saying “Hum Dilli Har Gaye” – Sarfraz’s heartfelt lament as to the cause of the loss is just brilliant.

I had posted this scene once on NG as Scene of the Week.

Shashi Kapoor is brilliant whether in his display of obsession or his vulnerability. Shabana Azmi is excellent as the angry jealous wife and her expressions in the final scene are marvelous. Naseeruddin Shah is excellent as the angry revolutionary and Jennifer Kendal is like a tigress in the role of a protective mother. Nafisa Ali looks gorgeous and acts well as the naive young girl and Ismat Chughtai, the famous author, acts well as the grandmother of Ruth. The performances by the rest of the supporting cast are good too.

Shyam Benegal’s direction is brilliant. Almost every scene is a gem. This is definitely one of his best movies and one of the best literary adaptations ever made in India. Dialogues by Pandit Satyadev Dubey and Ismat Chughtai are excellent. Cinematography by Govind Nihalani is excellent. Being a period film, the havelis and the costumes are very authentic. The song “Ishq Ne Todi Sar Pe Qayamat” sung by Mohammad Rafi is very good and picturized very well too. The movie won the Filmfare Awards for Best Film and Best Director for Shyam Benegal. It’s a classic not to be missed.

The movie won the following awards according to wikipedia.