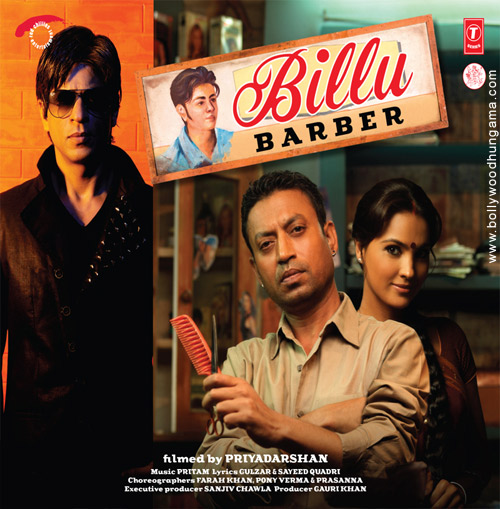 Billu is the remake of the Malayalam film Katha Parayumbol which itself is inspired from Krishna and Sudama’s tale. Bilas Rao Pardesi, a poor barber is struggling because of the advent of another salon with a revolving chair. He can’t pay his bills and his kids are thrown out of school as a result. Things change when Sahir Khan (Shahrukh) the superstar comes over to the village to shoot for a movie. People find out that he is Billu’s friend and everyone from his wife and kids to the village folks want Billu to introduce them to the superstar. The villagers do Billu favors in their quest to get introduced to Sahir Khan. Billu is afraid that his friend might not recognize him and is ashamed of his misery.

Billu promises that he will introduce them to Sahir but is unable to reach him and the villagers think he is a fraud. Is he really a fraud or does he really know Sahir Khan is what the rest of the story is about.

Irfan Khan is excellent as Billu. He is brilliant in every scene. Shah Rukh the producer needs to be commended for giving him this role. He doesn’t try to steal the limelight from Irfan. This is Shah Rukh’s third role as superstar counting Om Shanti Om and Luck By Chance too where he played himself. They might as well as have Shah Rukh play himself with all his movie posters plastered all around. Shah Rukh overacts for the most part but kind of makes it up in the last few minutes with a beautiful speech. The speech is very powerful and moving because of the situation and the dialogues. Lara Dutta doesn’t suit the role and she should not have had any make up on. Om Puri, Rajpal Yadav and the kids are pretty good.

V. Manikandan’s cinematography is very good. He captures both the rustic as well as the movie in the movie scenes very well. The special effects before the song Love Mera Hit are really good as well as the matrix style fight scene. The dialogues are very beautiful. Priyadarshan is the master of remakes and he is the best when it comes to adapting South Indian movies in Hindi. Priyadarshan’s direction is very good and he keeps the movie interesting all along even though the songs come off as forced and look like there are in there just for commercial appeal except for Khudaya Khair and Billu Bhayankar. The scenes of Shah Rukh from his other movies seem totally unnecessary and look like he is paying tribute to himself.

Watch the movie for Irfan’s performance and for a simple, beautiful moral story.