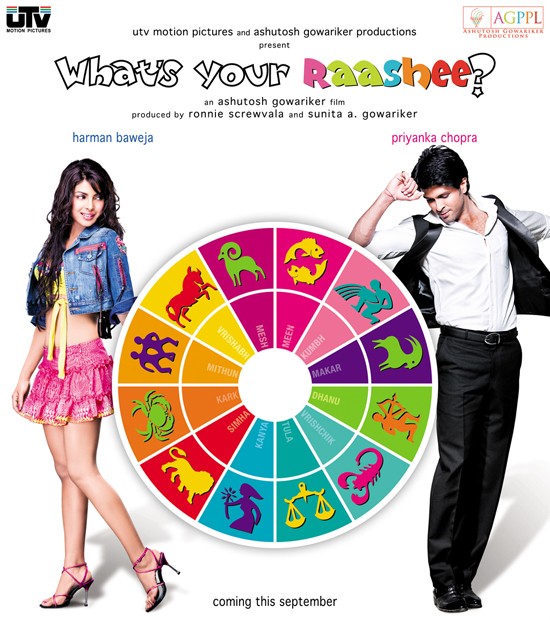 What’s Your Raashee? is based on the Gujarati novel Kimball Ravenswood by Madhu Rye, It is the story of Yogesh Patel, a young man who has always wanted a love marriage, is suddenly told that he must find his dream girl within ten days to save his family from ruin. Finding the dream girl is tough enough. Finding her in a hurry is even tougher. His solution is simple; he will meet one girl from each raashee – sun sign, as he feels that is the best way to make sure he finds a suitable wife, while also giving himself twelve chances to fall in love.

The novel was already adapted by Ketan Mehta into a TV serial Mr.Yogi (1989) which became very popular back then. Now that one did not have the same actress playing all the roles. If an actor/actress plays identical twins or two characters that by some freakish coincidence resemble each other then its ok. Now Kamal Haasan does ten roles in a movie because of his vanity and effort to prove that he is a great actor which he does not need to. But why the same actress to play twelve roles? This comes off as nothing but a gimmick or an exercise to save some money by hiring one actress instead of twelve. There is a ridiculous explanation given that Harman sees his dream girl in all of them.

Harman is ok. He is much better than in his previous two movies. Priyanka is excellent in a couple of roles but despite best efforts no actress can play so many different roles in one movie. Now obviously Priyanka must have seen a great opportunity here and decided to do the movie. But with so many characters, no matter how many quirks or small changes she makes she is still Priyanka.

The movie starts off with a ridiculous plot that Yogesh has to marry within ten days to inherit his grandfather’s wealth. It could just have been a guy looking for an arranged marriage. Yogesh’s meeting and a song with each girl becomes repetitive after a while and one does not care anymore. What difference does it make who he chooses as it is Priyanka anyway. If there were twelve different actresses the audience would probably have been curious as to who Yogesh will end up with.

A few of the songs like Aaja Lehraake are good but 13 songs are a bit too much. Ashutosh Gowarikar’s movies have always been lengthy and he obviously does not believe in brevity. Now Lagaan was excellent despite the length. Swades was good and well intentioned but it was a bit boring. Jodhaa Akbar was an ostentatious Saas-Bahu drama which was completely a figment of Ashutosh’s imagination. Ashutosh takes some silly decisions and thinks he is being very creative. His direction is horrible. He adds a few silly sub plots to the movie to make it even lengthier.