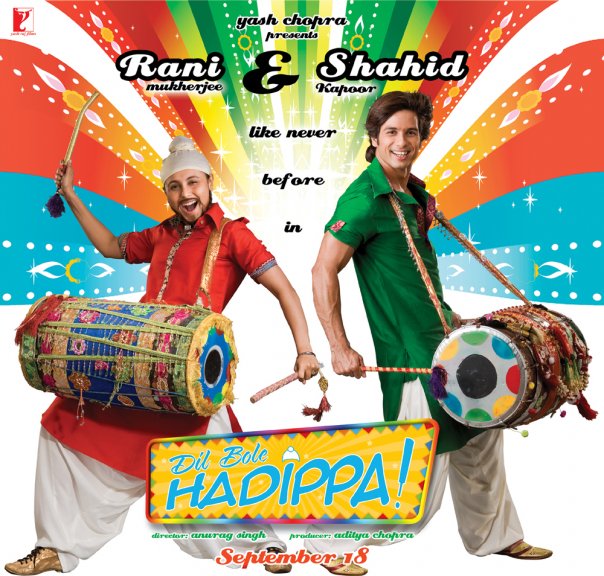 Dil Bole Hadippa is a shameless copy of the “She’s the Man”, a bad chick flick in the first place, which was based on Shakespeare’s Twelfth Night. Veera (Rani Mukherjee) is a girl who works in a local theatre group but dreams of playing cricket. Rohan (Shahid Kapoor), an England county cricketer, returns to India on hearing about his father’s heart attack. But it’s just a ruse to get him to captain his father’s cricket team which has been losing consecutively for the last 8 years. The rest of the story is how Veera puts on a turban and beard to become Veer Pratap Singh to fulfill her dreams.

One can tell it’s a girl from a mile but our Rohan cannot recognize its Veera but then recognizes that it’s Veera when she loses her contact lens. Yash Raj already did this ridiculous bit in Rab Ne but here they repeat it making this even more ridiculous. The movie is Rab Ne, Aaja Nachle, Chak De, Veer Zaara all rolled into one. And what’s up with the constant DDLJ references in all the Yash Raj films? Hey We know that you guys made DDLJ almost 15 years ago. Now please get over it.

Shahid should have never done this role because the character is written so badly. He probably could not say no to a Yash Raj production. He tries his best, even acting like Shah Rukh ala Chak De India in the coaching scenes. Rani Mukherjee is just horrible. She is annoying with her overacting, oversweet expressions and crying. Even with her beard and turban she looks like a girl with her physique and soft face. When male actors pretend to be women they at least try to modulate their voice a bit. But Rani, the so called great actress, does not even modulate her voice and just speaks in her regular voice. Yash Raj films seems to be taking the suspension of disbelief very casually or are thinking that audiences are idiots who would like anything. Anupam Kher repeats his annoying cool ‘Yash Raj films dad’ for the umpteenth time. Dilip Tahil gets to sprout horrible dialogues. Sheryln Chopra is irritating and is always dressed in the skimpiest of costumes. Rakhi Sawant, thankfully does not have much to do.

Story, Screenplay and Dialogues by Jaya – Aparajita are ridiculous. The dialogues are some of the cheesiest lines you will ever hear. Dialogues about ‘Aman’ between India and Pakistan, Hindustan/hindusthani and England, speech about women empowerment but the line about India and Pakistan being “Do bete hai jo curvat palat ke lete hai” takes the cake. Songs are all irritating with loud music and ridiculous lyrics. On top of it they are choreographed with too many dancers. Cinematography by Sudeep Chatterjee is annoying with the weird camera movements.

Anurag Singh’s direction is horrible. He basically rehashes “She’s the Man”, replacing soccer with cricket. Not a single scene is believable and the whole women empowerment also comes off as silly with the director wanting women to play along side Sachin Tendulkar. Yash Chopra, once made movies like Deewaar and even his love stories like Silsila and Darr were different but off late they have been rehashing the same fluff over and over again. Yash Raj films need to seriously introspect as they have become an object of ridicule and Dil Bole Hadippa is just horrible.