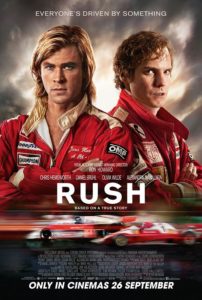 Two­-time Academy Award-winner Ron Howard delivers the exhilarating true story of a legendary rivalry that rocked the world. During the sexy and glamorous golden age of Formula 1 racing, two drivers emerged as the best: gifted English playboy James Hunt (Chris Hemsworth, The Avengers) and his methodical, brilliant Austrian opponent, Niki Lauda (Daniel Brühl, Inglourious Basterds). As they mercilessly clash on and off the Grand Prix racetrack, the two drivers push themselves to the breaking point of physical and psychological endurance, where there’s no shortcut to victory and no margin for error. Co-­starring Olivia Wilde (TRON: Legacy), it’s the heart-racing, epic, action­-drama that critics are calling “one of the best movies of this, or any, year”.

If you have watched Senna it will feel like a repeat of the rivalry between Senna and Alain Prost. There are some similarities in that James Hunt was more like Senna and Nikki Lauda was more like Alain Prost but this on field rivalry was before them.

But the off field rivalry is more made up in this case as the drivers were friends in real. This link gives detailed differences between the real and the reel story and one can see that they spiced it up a lot. The movie makes it seem that a newly married Niki was afraid of racing at Nürburgring but by then there were 50 people killed on that track and the vote was not one sided but won by just one vote. Must say that the casting was very good if you go by the looks. Link

While this movie is more about James Hunt and Nikki Lauda is supposed to be the bad guy the movie still focuses a lot on Nikki Lauda. Making a comeback so soon after being burnt so horribly and getting disfigured in a car crash is heroic and Nikki won the championship next year. James Hunt never won a championship again whereas Nikki won two more.

Chris Hemsworth was very good as the playboy car racer who enjoyed life. Daniel Brühl was excellent as Nikki Lauda and I think he will be nominated for an Oscar for Best Supporting Actor. Watched the real interviews of theirs and I think both did a very good job at playing them. Alexandra Maria Lara was good as Niki’s wife and Olivia Wilde looked pretty.Liked the way they used the It Happened One Night lift scene and turned it around.

Rush is an excellent movie and one of the best movies of 2013.

P.S. Had watched this movie back in December 2013 and this review was actually a comment after watching the movie.