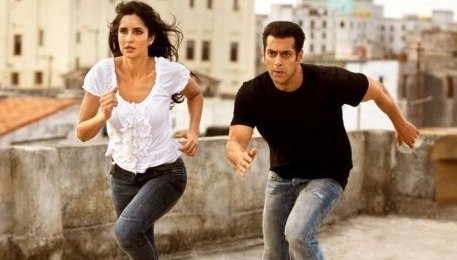 To be fair, Ek Tha Tiger is a very different beast from recent Salman Khan starrers, particularly his last two releases, Ready and Bodyguard. Now that could be construed either as good news or bad news depending on what you thought of those films. For those like me, who weren’t fans of those blockbusters, it’s refreshing to note that Ek Tha Tiger isn’t an over-indulgent one-man showreel. Hallelujah, this film has a plot. Unfortunately, however, it’s a one-line, threadbare plot around which director Kabir Khan constructs the entire movie.

In a nicely done opening, with enough slo-mo shots for the fans to whistle at, we’re introduced to RAW agent Tiger (Salman Khan), who, in a gritty Jason Bourne-ish action sequence, swiftly dispenses with a turncoat agent, then dodges armed assassins through the cobbled streets and dingy alleyways of a busy town in Iraq. Back home unscathed, Tiger, who we discover is just as comfortable with a ladle as he is with a gun, bribes his boss (Girish Karnad) with homemade daal before begging for a new assignment.

Packed off to Dublin to keep an eye on a suspect missile scientist (Roshan Seth), Tiger falls in love with the old man’s housekeeper, Zoya (Katrina Kaif), even as fellow RAW agent Gopi (Ranvir Shorey) advises him not to get distracted from the mission he’s assigned to.

The romantic portions in Ek Tha Tiger are warm and fuzzy, the humor thankfully clean and light-hearted, but as a thriller set in the world of espionage, it’s ironic that the people least intelligent here are the intelligence officers themselves. The interval point reveals a twist that you’ll probably guess a mile away; the only ones caught off-guard are the supposedly smart super-spies.

In his last film New York, director Kabir Khan delivered a watered-down mocktail version of a terrorism story. With Ek Tha Tiger he appears to be going for James Bond Lite. The film’s screenplay packs more holes than you’re likely to find in a fisherman’s net, and the clunky dialogue is the sort you’d expect from someone whose only research involved going through back issues of spy-themed comics.

What doesn’t disappoint is the action in this film. Whether Salman’s sliding down stairs on an overturned table firing at goons in a crowded marketplace, or using his jacket to stop a speeding tram from crashing into a populated street, the more ridiculous the sequence, the more cheers it inspires. A climatic sequence involving our injured hero on a motorbike, an airplane taking off, and lots of explosions, seems straight out of the Dhoom films, but it’s so cheerfully silly it’s hard not to smile.

The film loses its pace during those pensive scenes in which Tiger must make a choice between head and heart, and in those portions where both protagonists must consider the implications of choosing love over duty. The over-simplistic Indo-Pak peace message is only further evidence of the fact that this film treats a serious subject lightly.

Salman Khan’s performance in Ek Tha Tiger is moody at best. He jumps into the action scenes whole-heartedly but seems lost in the film’s dramatic portions, looking subdued even, like the birthday boy who’s having no fun at his own party. The romance between him at Katrina Kaif is sweet, but almost awkward – this film could have done with a little more passion between its leads. Katrina, faced with a fair bit of action herself, commits herself to the role, but her character has a cardboardish edge.

Despite its obvious flaws, Ek Tha Tiger is far from unwatchable. It’s a welcome change from the harebrained films we’ve seen Salman Khan in lately, and for what it’s worth he’s playing a character and not himself for a change. The question you have to ask is – Is that enough?