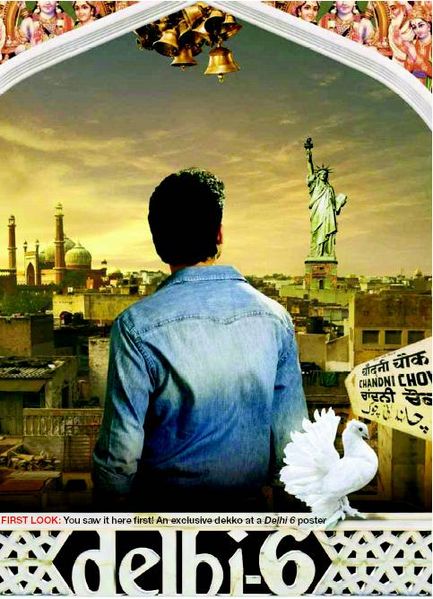 Delhi-6 is a mix of Swades and Welcome to Sajjanpur. It is the story of Roshan (Abhishek Bachchan), an american of Indian origin who comes to India to drop off his grandmother (Waheeda Rahman). He ends up falling in love with his neighbor Bittu (Sonam Kapoor) and gets caught up in the Hindu-Muslim riots amidst rumors of Kaala Bandar who is terrifying the citizens of Delhi. The movie ends up being preachy and takes its own sweet time to get to the plot. It looks like it is just a collection of vignettes for the major part of the movie.

The Ram Leela scenes get annoying after a while. You start to feel like you are watching a stage play. The whole Kaala Bandar track looks ridiculous and all the TV scenes about the Kaala Bandar are annoying. Abhishek’s line that India works and that the people make it work looks so forced and deliberately inserted.

Abhishek Bachchan is good at places and rank bad at some places with his fake accent and fake mannerisms. Sonam Kapoor looks very beautiful and acts very well but doesn’t get much on screen time. Rishi Kapoor is good as the Nawaab. Om Puri is ok. Pavan Malhotra is good. Watch his expressions during the end credits. It’s good to see a good actor like him getting good roles. Deepak Dobriyal is good as the sweet vendor and so is Atul Kulkarni. Aditi Rao Hydari is very expressive. Divya Dutta is very good as the untouchable. Amitabh’s special appearance is totally unnecessary and that whole scene needs to be edited out as it is ridiculous.

Rakeysh Omprakash Mehra’s intentions are good but he ends up trying to pack in too many things and as a result messes it up. He has Hindu Muslim riots, kaala bandar, untouchability, divided brothers and so on. People who go in expecting a Rang De Basanthi will definitely be disappointed. In the end it is average because it is just good in parts.