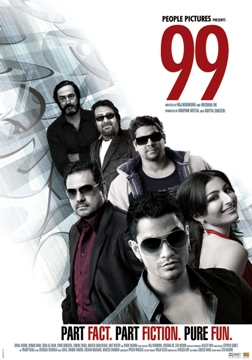 99 is a movie about two small time crooks Sachin (Kunal Khemu) and Zaramud (Cyrus Broacha), who run a business of duplicate SIM cards till they run into trouble with the cops. While trying to escape, they steal a Don’s (Mahesh Manjrekar) Benz and smash it. To recover his loss, he has them working for him and sends them to Delhi to recover his dues from Rahul Vidyarthi (Boman Irani), a gambling addict. The money recovered from him gets stolen and they all come up with a plan to bet on a cricket match. Will they be able to make it is what the rest of the movie is about.

Some scenes that are good like the one where Kunal talks about how their SIM card business went kaput, the scene with Mahesh Manjrekar and the answering machine, the scene where Kunal guesses Soha’s character’s name, the scene where Boman is in a meeting and can’t keep his eyes of the TV, the immediate scene after Boman predicts that Ganguly is going to get out, the scenes involving Kuber (Amit Mistry) and the final 30 minutes.

As to the flaws there are quite a few. Sachin and Zaramud staying in a 5-star hotel when they travel to Delhi to recover the dues. Rahul seems broke even after winning against Vinod Khanna’s character. Boman being so honest in the end when he is shown to be conning in all his earlier scenes.

Kumal Khemu acts well but this is third role as a crook after Dhoondte Rah Jaoge and Jai Veeru. He seems to be getting typecast as crook. Cyrus is hilarious and is funny even in scenes where he does not speak. Boman acts very well as the addicted gambler. Simone Singh is ok. Vinod Khanna is good in a small role. Amit Mistry as Kuber is hilarious with his accent and his english. Mahesh Manjrekar is good but he has being doing the same kind of role in every movie that he stars in.

The cinematography is good and the dialogues are funny at places. Raj Nidimoru and Krishna DK, who previously directed the immensely enjoyable Flavors disappoint this time. The movie is interesting and funny only in parts. It’s boring for the most part, as nothing seems to be happening on screen, just like with the main characters in the movie. The whole Simone Singh track is boring and could have been edited out. It would have made more sense if they had some story between Kunal Khemu and Soha Ali Khan instead. Their track seems half baked.

The problem is that there is not much of a plot in the movie and the directors seem to have tried to just pad up time. The movie gets real interesting and funny only in the last 30 minutes or so. If the whole movie was that slick and fast paced, then the movie would have been an entertaining thriller but it isn’t so.