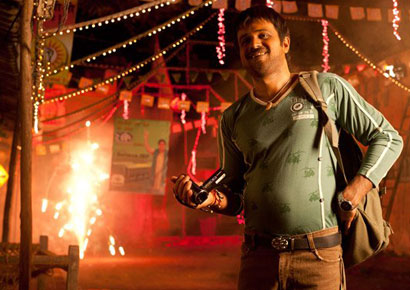 Where does a filmmaker like Dibakar Banerjee go from here? His debut film, the delectable Khosla Ka Ghosla, drew us into the story of a middle-class family fighting to save their land. His second was the sparkling-with-smart-lines and engaging indie, Oye Lucky Lucky Oye, also among the first films to signal the arrival of the change gripping Bollywood. His third, LSD, was a bold, experimental story of love, sex and betrayal, narrated episodically.

Thankfully, Banerjee seems to be aiming higher with each subsequent film. Shanghai, Banerjee’s fourth film, is his best. It’s also a very important film, in addition to being consistently engaging and extremely satiating. Why just make a good film, when you have the wherewithal to make a powerful one? A film that can change perception; one that can make a statement, and push the envelope.

Shanghai does all of that, and does it well. Banerjee brings together great plot (inspired by Greek writer Vassilis Vassilikos’ political novel, Z) some very good actors and a bunch of able technicians in a movie that clocks just a little under two hours, but occupies your mind for many after. It has a story few filmmakers in this country would dare to tell – it’s one thing to show politicians as single note, corrupt antagonists (as we have been seeing for years now), and quite another to explore the red-tapism and inner workings of the government machinery, and how it affects the lives of many (as in Shanghai).

On the face of it, the plot is simple – a social worker, Dr Ahemadi (Chatterjee), fighting for the resettlement of the hapless residents of Bharat Nagar, is bumped off. The involvement of the political-builder-police nexus is apparent. Stuck between them is Dr Ahemadi’s student, supporter and lover, Shalini (Koechlin), looking for justice among the mayhem; TA Krishnan (Deol), the guy in charge of the enquiry commission set up to investigate the death; and a small-time video filmmaker, Joginder Parmar aka Jogi (Hashmi), who gets dragged in unwillingly.

The pace is breakneck. Banerjee and co-writer Urmi Juvekar pen a tight screenplay, one that gives you little room to breathe, the story moving swiftly. Shanghai is not the kind of film where one-liners come thick and fast, yet dialogues have gravity. The narrative is propelled by Namrata Rao’s deft editing (with Ishqiya, Band Baaja Baaraat, Kahaani, and now Shanghai, she’s emerging as one of our best), and Mikey McCleary’s background score. The sound of dhols to denote cacophony even as life seems brittle elsewhere is a neat trick.

Shanghai wouldn’t have been what it is without its actors. Sadly, we are yet to constitute an award for Best Casting Director (most films don’t even have one), or Atul Mongia would stake his claim. The film boasts of actors who shine in smaller roles, among them Pitobash, Anant Jogue, Tillotama Shome and Supriya Pathak.

Chatterjee’s casting as Dr Ahemadi is a masterstroke, his character probably the film’s most important, even if short in duration. My favourite performance of the film, though, comes from the ever-dependable Farooque Shaikh, who’s a delight to watch onscreen. Another actor in the same role would have been forgotten soon after the film ends, but Shaikh nestles himself in your memory with a knockout act.

Okay, so Shanghai is “kissy actor” (in the words of Banerjee) Emraan Hashmi’s big shot at winning over that audience which doesn’t think much of his bad-guy-who-makes-out-with-the-pretty-girls roles. As Jogi Parmar, Hashmi is stripped of all charm, the stained teeth and paunch making him a lot less appealing. Yet, make-up and physical transformation isn’t always directly proportionate with great acting. Hashmi, thankfully, goes beyond the exterior aspects of his character, and shines as the vulnerable Jogi. The transformation is indeed commendable, and Shanghai could do for Hashmi what Omkara did for Saif Ali Khan.

Abhay Deol, in comparison, has a comparatively one-note role, but he makes a mark in spite of a suspect Tamil accent. In the final moments of the film, especially, Deol packs a punch. Kalki Koechlin is the film’s weakest link, her physical appearance probably the only factor that seems to have worked in her favour (as it has in past films). How long, though, will she continue playing the agonised expat/NRI with doped-out eyes and weird accent?

To sum, Dibakar Banerjee’s Shanghai walks the thin line between mainstream and meaningful cinema, and does so beautifully. The rare, well-deserving Rs100cr film? Who cares? There’s more to cinema than box office records and opening weekend numbers; Shanghai is the perfect example. Watch.