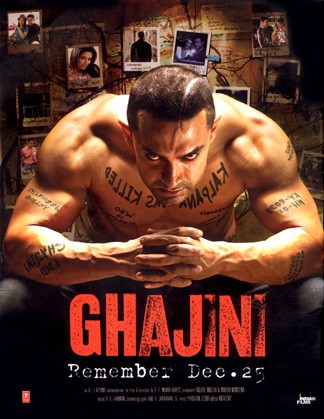 Ghajini is a crude, shameless copy of Memento. Murugadoss copies Memento’s plot and scenes and adds some songs and a silly love story. The makers of Ghajini have added a disclaimer saying the movie is about short term amnesia so some scenes will be the same as other movies. Yeah, may be students should add a similar disclaimer before they start writing their exams and copy from other students. Aamir had written in his blog that Murugadoss heard about Memento and wrote the story without watching Memento. Yeah Memento came out in 2000, the Tamil Ghajini in 2005. If Aamir really believes this he is the world’s biggest idiot or else he thinks that every one’s an idiot.

Memento had Guy Pearce trying to avenge his wife’s murder. He gets hit on the head while trying to save her and suffers from anterograde amnesia and cannot remember for more than 15-20 minutes. He takes polaroid pictures and writes down notes and tattoes important facts. The movie has alternate black & white scenes which move forward and alternate color scenes which run in reverse order. The final black & white scene turns into color halfway through the scene. It’s like converging from the front and back to the same point. The climax is just genius and you have to listen to the dialogues as therein lies the whole turning point of the movie. It’s when you see this you realize why the movie needed those scenes to be in reverse order. Watching Memento is like watching a puzzle unravel. Yes it takes some cinematic liberties and leaves some things unanswered, yet it’s a cinematic masterpiece recommended for every movie lover.

Ghajini has Aamir trying to avenge his girlfriend’s murder. He gets hit on the head while trying to save her and suffers from anterograde amnesia and cannot remember for more than 15-20 minutes. He takes polaroid pictures and writes down notes and tattoos important facts. He even has similar tattoos at the same places as Guy Pearce. Kalpana was killed tattoo is at the same place on his chest as Guy Pearce has John G raped and murdered my wife. Well if Aamir says Ghajini is just inspired it is just an inspiration. Now where Memento had only a couple of scenes where his wife is shown combing her hair or reading a book here we have a full blown stupid love story. Asin is a do gooder who lies that Aamir is her boyfriend and Aamir wants to confront her but doesn’t. What should have been a fifteen minute scene drags on and on. The scenes are amateurishly written. The action scenes are typical b-grade south indian action scenes. The movie is full of unnecessary gore. The only thing better than the tamil Ghajini is that there is no double role for the villain here.

Aamir is very unconvincing as the businessman and looks old in the love story part. Aamir doesn’t have that many dialogues in the later part and just keeps grunting and screaming ala Sunny Deol while on the revenge spree. Asin tries to be Mother Teresa and a dumb bimbo at the same time. She overacts and is annoying with her exaggerated hand movements. Jiah Khan has a very stupid role but acts better than her Tamil counterpart Nayantara. Pradeep Rawat doesn’t look menacing enough.

A R Rahman’s background music sounds seems like already heard before The songs are good though he lifts the first 20 seconds of Kaise Mujhe from Green Day’s song Boulevard of Broken Dreams. Prasoon Joshi’s lyrics are childish rhymes with Aaas Paas Guzarish, Tang Tang, Rang Rang. Only Kaise Mujhe has somewhat decent lyrics. The songs are picturized horribly. Why a businessman would imagine himself as Tapori or with an open shirt in a song is beyond logic.

Murugadoss direction is horrible. The movie is filled with so many flaws that looking for logic is like searching for needle in a haystack. The whole cop scene is ridiculous with the cop entering Aamir’s apartment which is conveniently left open and then the scared cop running away from Aamir. Jiah Khan enters Aamir’s apartment which is again conveniently left open. In the last few scenes if Aamir does not remember things after the accident why does he have to read his two diaries which were written before the accident? He reads the two diaries and Jiah Khan tells him what happened after that and he follows the villain and fights the goons all this in fifteen minutes. Murugadoss suddenly recovers from his short term memory loss and realizes that Aamir has short term memory so we have a scene where Aamir forgets who Ghajini is. The director has these scenes which run in fast foward blurry motion yet the movie is three hours long. The screenplay is horrible with the same love story scenes running in fast forward when Jiah and Aamir read the diaries.

The movie can be tolerated only by die hard Aamir fans or people who like stupid action movies of Rajnikanth, Mithun and Sunny Deol. Just skip this and watch Memento instead. You will be happy that you watched one of the best movies of all time.