This is a slightly edited version of something I wrote in June 2009. 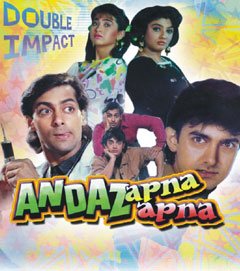 Andaz Apna Apna is the story of two wastrels Amar (Aamir) and Prem (Salman), whose only aim in life is to get rich by marrying a rich girl. They both fall for Raveena, an NRI from London who comes to India to get married. The rest of the movie is about how they try to outsmart each other in their attempts to woo her. The movie did not do well when it released as many people thought that it was a silly movie with no story but over the years it has acquired a cult following. The movie is full of gags and all kinds of humor – funny, silly, subtle, toilet, slapstick. The movie doesn’t have a serious plot and is not meant to be taken seriously. It’s the kind of movie where you don’t have to use your brains and can just have a blast laughing your guts out.

The music by Tushar Bhatia sounds like that of old songs of O P Nayyar from the 50s and the 60s. Lyrics by Majrooh Sultanpuri are good. The songs ‘Do Mastane’, ‘Dil Karta Hai’, ‘Ye Raat Aur Ye Doori’ and ‘Ello Ji Sanam Hum Aa Gaye’ are all pretty good.

Aamir gets the best lines and is excellent as the oversmart Amar. Though he overacts in a couple of scenes he completely steals the show. Salman is good as the slow witted Prem but he is not in his element and his hairstyle keeps changing as the movie was delayed a lot. Raveena is ok in the role of a dumb bimbo. Karishma is ok in the role of Raveena’s assistant. She has the horrible hairstyle which she used to have before she had the whole Manish Malhotra makeover. Paresh Rawal is brilliant both as Ram Gopal Bajaj and Teja. Mehmood reprises his role of a director of ‘Wah Wah Productions’ from ‘Pyar Kiye Ja’. Deven Verma is good as Aamir’s father. Javed Khan as Anand Akela, Viju Khote as Robert and Shehzad Khan as Bhalla are very good. Jagdeep is a bit annoying in his ‘Soorma Bhopali’ role and so is Shakti Kapoor with his silly antics as Goga. Juhi Chawla, Govinda are hilarious in their special appearances.

Rajkumar Santoshi’s direction is excellent and this came after his serious fare like Ghayal and Damini. He spoofs every thing from twins to amnesia to Mogambo to Rajnikanth. It’s definitely a movie which has a terrific repeat value and can be enjoyed more if you watch it with friends. The movie kind of drags a bit at the end but it is definitely one of the best comedies ever made in India.