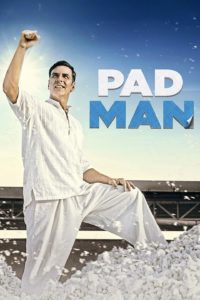 I never expected that a film on Pads would be so Interesting, so Inspiring and so Emotional. It is a touchy subject and makes one uncomfortable to talk about even among the educated and urban class society. The social stigma attached to it is very deep and rooted and in a country like India, there are 100’s of other superstitious omens besides being treated as filth.
Visions to make a film on social subject and especially on such a touchy subject need not only guts but also solid content. This visionary director had a solid content in his silver platter in form of a Real life Padman and his inspirational journey, all he needed was the team to make it happen and I will applaud every crew member participated in this movie especially the lead Akshay Kumar.
First of all it’s a brave attempt and to succeed in it is exemplary. The 10 Min speech by Akshay Kumar addressing UN is the Best Inspirational/Motivational speeches I have ever heard so far in any film. I had tears in my eyes in the end & they were not only Because of the speech, they rolled down because I was totally engaged in what was happening as I was made aware of our situations and conditions in Indian Villages, I was made aware that the people can reach such great heights if their will and passion is put together towards their goals and because I was listening to a PADMAN (An uneducated guy explaining the business model) not the actor Akshay Kumar.
Apart from the inspiring journey of Padman, I loved the subtle chemistry between Sonam and Akshay, The irritation and awkwardness Akshay created within his family and among the neighbors, the simplicity of the character he maintained throughout the movie and the detailed version of the success of his business model. I loved the movie and would recommend each and every person to watch.
It is Akshay who has ruled over every other star in terms of Quality films this decade. This decade Akshay has given variety of movies on different topics but according to me Airlift and PADMAN stands out as the two Masterpieces of this decade. Highly Recommended!!!
Post Views: 29
Share this
0 likes
Related Articles
1 Comment