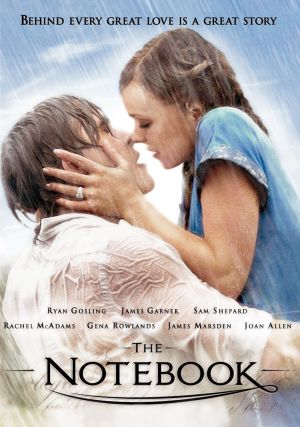 The Notebook is based on the novel of the same name by Nicholas Sparks. An old man Duke (James Garner), narrates a love story to his fellow patient (Gene Rowlands) in a nursing home from his notebook. The story revolves around two teenagers Noah (Ryan Gosling) and Allie (Rachel McAdams) who fall in love with each other but get separated by Allie’s domineering mother (Joan Allen) as Noah hails from a poor family. Having not heard from Noah for several years, Allie meets and gets engaged to a soldier named Lon. She then visits Noah after finding out that he has restored an old home for her and now has to choose between her fiancé and her first love.

Some may dismiss the movie as one of those regular chick flicks or a tearjerker but the movie is a poignant love story. It does have the cliched rich girl poor boy track but what makes the movie different is that the passion and exuberance of teenage love gives way to a more mature love. The movie tries to show that their love for each other was not just infatuation but real love.

Ryan Gosling is brilliant as Noah and he brings out the intensity and restraint equally well. Rachel McAdams gives a great performance as the confused Allie. Her expressions change from one extreme to another in a few minutes. James Garner is excellent as the elderly husband and Gene Rowlands is excellent as the elderly woman suffering from dementia. Joan Allen also gives a wonderful performance as Allie’s mother. The rest of the cast all deliver good performances.

Cinematography by Robert Fraisse is excellent and the sequence where Noah takes Allie for a boat ride is a beautiful picture perfect moment. Nick Cassavetes’s direction is excellent and he captures the innocence of the 1940s, the teenage relationship and the elderly love really well.

It’s a shame that the movie did not get any Oscar nominations. It’s much better than some of the movies that were nominated that year. Ryan Gosling, Rachel McAdams, James Garner and Gene Rowlands all give performances worthy of acting nominations. It’s a movie recommended for everyone who likes great love stories.