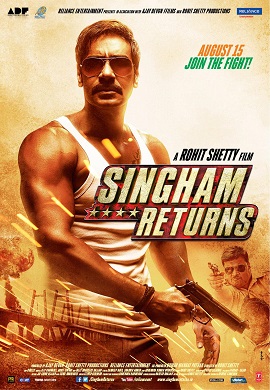 Possibly Singham (2011) was best potboiler masala I have enjoyed in last 10 years. The energy, the aggression, the dialogues…it showed how films of this genre should function.

Singham Returns takes a leaf out of its prequel, but with half conviction. This film feels overlong although seldom boring. The pace is uneven and that’s what costs Singham returns. The clap-trap moments like prequel are very few and far between. This film is just plain. The entertainment quotient is intact. In fact Shetty’s comedy takes a high at couple of scenes. Kareena’s character, although reminiscent of her Golmaal3 act, draws some laughter. Also some confrontation scene, especially the ladies vs Zakhir Hussain scene leaves a mark.

But Singham never derives that inner instinct to sympathize. The film plays on same emotions which are done to death in our cinema. The writing is unmoving and the impactful dialogues are out of window. Shetty manages to put up a watchable show, as that’s what one can least expect from this man who has seldom failed in his work.

The music is big trouble even if there arr just three songs. The Honey Singh song at the end doesn’t really help.

Singham Returns may pale in comparison to its prequel but Ajay Devgn for a fact, has gotten better. His voice, his eyes, his dialogue delivery- He lends good support. Kareena Kapoor does her bit and she doesn’t come across as irritant which most actress comes in such roles. Her comic moments are genuinely funny.

One of the major problem again is the villain model here is complete turn-off. Prakash Raj in first instalment brought fair amount of animosity among the audience and that within his funny traits. But Amol gupte just couldn’t make much out of meddled role.

In all fairness, Singham Returns is above average affair. It has its downhills and uphills, but a stellar performance from Ajay and Shetty’s experience saves Singham Returns from lot many lapses. They deserved better sequel but only if they had better writers. Still, even if its bit disappointing, but its far from boring.