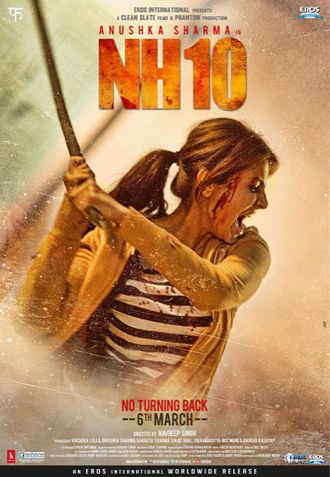 I don’t remember the last time I was hooting for a female character, who is not all goodie-goodie and has shades of grey, empathizing and sympathizing with her throughout the duration of a film. My firm belief in writing a good screenplay just got reaffirmed the moment I stepped out of watching this violent, engaging and brutal drama called NH10.

The film packs a punch with its strong and crisp narrative which is fluent and coherent. When you’re intrigued about every second and inquisitive about what’s-going-to-happen now scenes, it’s a signal that the film has succeeded with flying colours. The first half that steadily mounts up the drama leaves you on a terrific twist and only builds up excitement for rest to follow.

The second half sets the ball rolling with one twist followed by other. The background songs that pops up in between do try extremely hard but doesn’t quite for a simple reason – the screenplay itself is meticulously penned that it didn’t require any “gimmicks” to highlight the intensity.

Navdeep Singh owns the film with never losing the mark in execution. He for one extracts terrific performances even from bit characters, let alone the leading lady! The writers definitely deserve accolades for a screenplay which is too well written.

Anushka Sharma, whose character wanders everywhere in seek of help and the viewers too are compelled to think of what she can really do! That’s the level of involvement the viewers will have with the character. Anushka, who excels in her role shows enough acting chops in NH10 and takes the film one notch up. She surprises, and how! Every other character as mentioned does cent per cent justice to their role.

NH10 at the end is one audacious dramatic thriller that will refuse to come out of your head even after you are done seeing the film. I am going with two thumbs and ask you to not miss it for your own good.