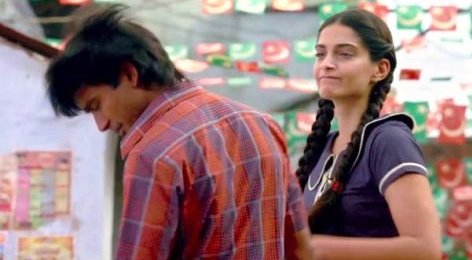 A good way to measure the success of a love story is to ask yourself how much you want its protagonists to end up together. Raanjhanaa is about a young Hindu boy in Benares and his unwavering love for a Muslim girl who doesn’t see him as anything more than a friend. From the moment we’re first introduced to them as children – him dressed as Shiva, her performing namaaz – it becomes clear there can be no love story here. Yet, Kundan (Dhanush) has been crazy about Zoya (Sonam Kapoor) ever since they were little. Convinced she’ll change her mind, he pursues her relentlessly…throughout their school years, and well after she returns from Delhi on completing college, unaware that she’s already in love with a boy she met on campus (Abhay Deol in a cameo).

Tanu Weds Manu director Anand Rai exploits the vibrancy of the holy city, and yet gives us a lived-in feel of Benares, rather than taking the typical travel-brochure approach. He banks as much on the unmistakable charm of his leading man to deliver a terrific first hour that breezes by with plenty comic moments and some genuinely heartfelt scenes.

Kundan’s obsessive pursuit of Zoya is nothing short of stalking. Equally disconcerting is the idea that the filmmakers would endorse slashing one’s wrists as a way to profess love. Yet, truth is, these scenes don’t necessarily ring untrue in the film’s spot-on depiction of small-town India and its Bollywood-bred youth.

The script unfortunately goes off the rails in the film’s second half, when the story shifts to the JNU campus in Delhi, where our protagonists put romance on the backburner and busy themselves with active politics. Some interesting ideas, inspired by real-life current affairs, are explored here – the formation of a citizen’s party, the clash between corruption and idealism, and the oppression of the rural class – but despite the filmmakers’ best intentions, this track doesn’t fit seamlessly into the larger narrative.

If there’s one reason Raanjhanaa doesn’t entirely disappoint in spite of its problems, it’s Dhanush, who offers an uninhibited performance that’s hard to take your eyes off. A National Award winning actor in Tamil cinema, Dhanush slips into the skin of Kundan and owns the part. He’s complemented ably by Sonam Kapoor, who does some of her best work here, going smoothly from innocent to manipulative to cynical, without ever losing Zoya’s inherent vulnerability. The film also benefits from two solid supporting players: Swara Bhaskar, superb as Kundan’s childhood friend Bindiya, who pines for him unashamedly. And Gangs of Wasseypur’s Mohammad Zeeshan Ayub as Kundan’s best friend Murari, whose rat-a-tat lines provide some of the best laughs.

For its immensely entertaining first half, a winning score by AR Rahman, but most of all for Dhanush, this is a film that’s worth your time. I’m going with three out of five for Raanjhanaa. It’s not perfect, but it’ll do.