The Commuter Movie Review by Sputnik 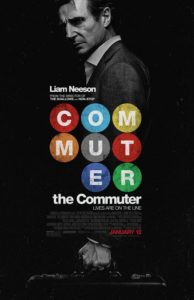 In this action-packed thriller, Liam Neeson plays an insurance salesman, Michael, on his daily commute home, which quickly becomes anything but routine. After being contacted by a mysterious stranger, Michael is forced to uncover the identity of a hidden passenger on his train before the last stop. As he works against the clock to solve the puzzle, he realizes a deadly plan is unfolding and is unwittingly caught up in a criminal conspiracy. One that carries life and death stakes, for himself and his fellow passengers.

The premise or the story is very interesting. The movie could have made for an interesting action thriller like Taken but its stupid CGI filled action scenes are ridiculous and make it a train wreck literally.

Liam Neeson looked old but was good as Michael MacCauley. Vera Farmiga was very good as Joanna. Patrick Wilson was good as Alex Murphy. Jonathan Banks (Mike from Breaking Bad) was good as Walt. The rest of the cast was good too.

Jaume Collet-Serra’s direction is ok but a better director could have turned this into a very good movie. You could skip this and watch Taken again instead.