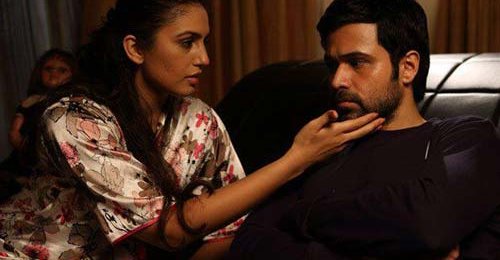 A very different beast from Makdee, his charming directorial debut from eleven years ago, Ek Thi Daayan, co-written and co-produced by Vishal Bhardwaj, sees the filmmaker revisit the mythology of witches once again. But where Makdee was an old-fashioned fable about a village witch who supposedly turned humans into animals, Daayan, set in the modern, urban world, is intended as an eerie supernatural thriller.

First-time director Kannan Iyer sets up the film nicely, introducing us to our protagonist Bobo (Emraan Hashmi), who appears to have everything…a successful career as a magician, a supportive fiancée, Tamra (Huma Qureshi), and even a young boy they have chosen to adopt. Yet, Bobo is haunted by hallucinations of his dead sister. When he delves into his past through hypnosis, he must confront his memories of the mysterious woman, Diana (Konkona Sen Sharma), who was hired to babysit his sister and him as kids.

Iyer does a good job of conveying the curious, suspicious nature of an eleven-year-old obsessed with the idea of the dark side. When Diana enters their lives, all young Bobo needs is a clue to confirm his theory, and Konkona plays up the intrigue deliciously.

Back in the present day, just when Bobo appears to have shut out the past, another mysterious woman, Lisa Dutt (Kalki Koechlin), enters his life. Bobo insists she’s a witch, but Tamra befriends Lisa and convinces him otherwise.

The film’s USP is co-writers Vishal Bhardwaj and Mukul Sharma’s decision to transport the folklore of witches to the heart of a modern-day story. Young Bobo believes that hell exists at the bottom of his building, and he’s constantly trying to program the lift into traveling all the way down below the ground floor where mean neighbors, evil stepmothers andkhadoos watchmen have been banished. There’s potential in the premise that your nanny, or the woman buying your flat, could be hiding a sinister secret.

But alas, the film reveals its chinks in the final act when it arrives at an underwhelming climax involving such clichés as child sacrifice and particularly a human-versus-evil forces face-off that seems straight out of a bad Vikram Bhatt movie, complete with laughable special effects. The “big twist” is easy to predict, and the film’s message so pat, you can’t help rolling your eyes the moment it’s delivered.

In the thrills department, Daayan packs one or two effective jump-in-your seat moments, but for the most part it cruises along on the strength of its suspense alone. Emraan Hashmi gives a nicely contained performance, never going into ham-and-cheese mode as the paranoid protagonist. A word also for Vishesh Tiwari who leaves a lasting impression as young Bobo.

Yet, despite its solid pedigree, the film sadly is never greater than the sum of its parts. The makers exploit more than a few age-old superstitions associated with witches, but have nothing particularly new or important to say.

I’m going with two out of five for Ek Thi Daayan. It nicely builds up intrigue, but leaves you wanting more in the end.