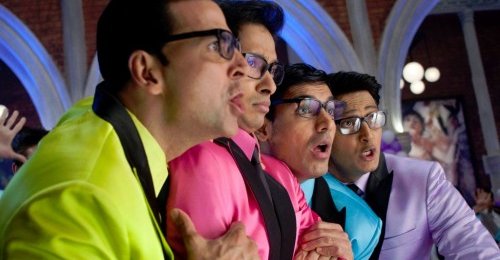 It’s ironic that the funniest joke in Housefull 2 should appear after the film has ended. In the outtakes during the closing credits sequence (if you’re brave enough to still be watching!), Akshay Kumar brings Asin to meet his father, a sleazy shrink named Dr Ranjeet Vasna K Pujari, played by yesteryears villain Ranjeet. Inching towards the girl, unbuttoning his satin black shirt, the leering senior mutters salaciously: “Baby, baby, baby!” When informed by Akshay that she’s the soon-to-be wife of his son, he instantly retraces his steps, buttoning up again, now muttering “Beti, beti, beti!”

Housefull 2, directed by Sajid Khan, is ‘bigger’ than the last film, but not necessarily better. To be fair, you can’t use words like ‘better’ or ‘funnier’ to compare these films; and asking me which one I preferred out of Housefull and Housefull 2 is like asking me what I’d rather have between a migraine and a hernia. Thank you, but I’ll pass.

This lazy sequel recycles the same pedestrian humor we were served the last time round, although the canvas has evidently increased. Rishi Kapoor and Randhir Kapoor are bickering half-brothers Chintu and Dabboo, who’re both seeking a rich groom for their respective daughters, played by Asin and Jacqueline Fernandez, who are named what-else-but Heena and Bobby! Ritesh Deshmukh is Jolly, the petrified son of his dacoit-turned-millionaire father JD, played by Mithun Chakraborty; and Akshay Kumar, John Abraham and Shreyas Talpade are his buddies, each of whom must assume the identity of Jolly at some point during this mindless film.

Akshay is paired opposite Asin, John opposite Jacqueline, Shreyas opposite Shahzahn Padamsee, and Ritesh opposite Zarine Khan. Before the end of this film, every single one of these characters – and a handful more – lands up at the sprawling home of JD for matters involving marriage.

Director Sajid Khan’s gags have no lofty aspirations, they only want a laugh out of you – never mind if your laughter is forced or unintentional. In one scene, an alligator repeatedly snaps at Ritesh’s bum, and a python attaches itself to Shreyas’ crotch. An equal opportunity offender, Khan directs tasteless jokes at everyone from gays and midgets, to the physically handicapped and the dark-skinned. But the problem isn’t that the jokes are rude. They’re infantile and unoriginal, and Rohit Shetty’s Golmaal films do them better.

Comedy is all about timing, and save for Ritesh Deshmukh who is genuinely funny in many scenes, and Akshay Kumar who gets a few moments to shine, the cast of Housefull 2 largely disappoints, with John Abraham leading the pack as he fails spectacularly in matching his brawny physicality with a surprisingly effete demeanor. The girls – who between all four of them don’t possess a single comic bone – have a permanent deer-caught-in-the-headlights expression, and each time they’re on screen together you’ll feel you’re watching an advertisement for collagen and Botox. Even the usually dependable Rishi Kapoor hams it up like there’s no tomorrow, his performance more or less reduced to dishing out corny barbs like: “You son of a slimy pseudopodia!” and “You have piles in your brains!”

Housefull 2 is for four-year-olds who don’t know any better. For anyone with taste, or anyone seeking genuine laughs, there’s nothing here. I’m going with one out of five for director Sajid Khan’s Housefull 2. I’d rather watch reruns of his TV shows instead; they were pure gold compared to this drivel!