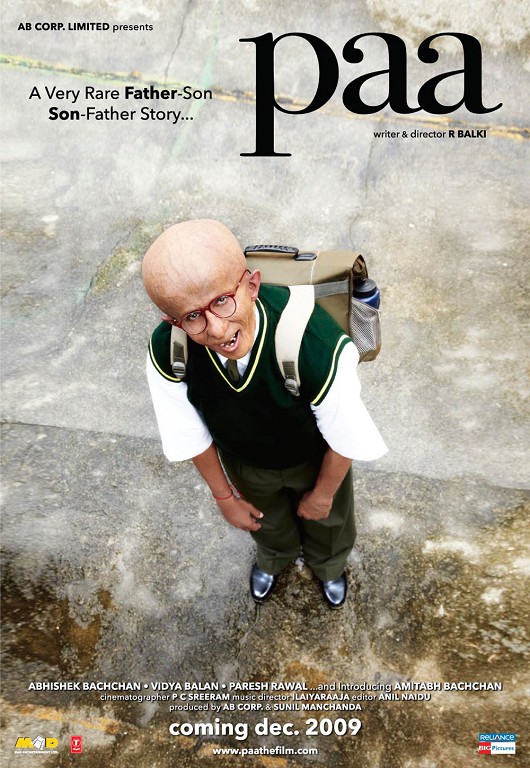 Auro (Amitabh Bachchan) is an intelligent, witty 13 yr old boy with an extremely rare genetic defect called Progeria that causes accelerated ageing. Mentally he is 13, very normal, but physically he looks 5 times older. In spite of his condition, Auro is a very happy boy. He lives with his mother Vidya (Vidya Balan), who is a gynecologist. Auro receives an award from Amol Arte (Abhishek Bachchan), a young, progressive politician. It turns out that he is Auro’s father and the rest of the movie is him trying to bring his parents together.

The story is nothing new except that instead of cancer he has Progeria which is a ruse to let Amitabh play the kid. Kids with Progeria look aged but they are not 6 ft tall. One of the songs in the movie has a little kid playing Auro and it would have been better if that little kid had played the character in the whole movie. Some of the scenes are good like the one where Vidya answers a neighbor who is curious about Auro or Auro running off from a girl or Auro’s asking Amol for the exact day and waiting all day for the trip or Auro checking out Amol and his pictures for similarities and his conversation with his friend Vishnu about his dad.

The movie’s titles do not work as Jaya Bachchan comes off as a school girl trying to remember the names. Some of the scenes like the one where Auro comments about Algebra do not work. The whole taking on the media has a good point but is badly executed with Abhishek overacting and looks like it is from a different movie. He somehow does not send those people to the rival politician’s house. Amol going on TV again to proclaim Auro as his son and the ‘saath phere’ in the hospital is just ridiculous as one never gets the feeling that Amol and Vidya really loved each other at any point.

It also seems a bit far fetched that Amol, a politician, would have so much time to spend with some kid and would be chatting with him. Kids can be mean and rude sometimes but there are no problems for Auro on that front as there is never any snide remark about not having a father or any one making fun of him for his looks. Auro is himself a smartass and does not speak like a 12 year old and the kids do not act their age and instead make wise cracks.

The make up hides Amitabh completely but it should have given him a cleaner face instead of wrinkled cheeks making him look like an alien. If the makers had not advertised and kept it a secret no one would be able to guess its Amitabh. Music by Ilayaraja is soft and suits the movie but the lyrics are pedestrian. Ilayaraja recycles his old tunes and it seems that the lyricist Swanand Kirkire has not been able to write good lyrics to the existing tunes. Those having heard the original tunes will feel that there is something amiss with the Hindi lyrics even more.

Amitabh is excellent as Auro. He slouches and gets a 12 year old boy’s body language right but all that make up prevents him from giving any facial expressions. He also loses his famous baritone and instead whispers in a nasal voice but his monkey dance is annoying though. The kind of hard work he has put in for the role is itself enough for him to be nominated for every Best Actor award and to probably win most of them. Vidya Balan gives a very good performance as Auro’s mom. Abhishek Bachchan tries hard to be cool and this does not come off well whether he is giving a speech to the kids or his conversation with Vidya to have an abortion. His character is badly written. Arundhati Naag as Auro’s grandma is decent and Pratik Katare as Auro’s friend Vishnu is good. Paresh Rawal’s character is unnecessary and could have been avoided.

Balki should have concentrated on the Progeria and the relationship part and avoided the whole politician and corruption bit. He unfortunately never delves into the trauma that a kid with Progeria and his parents might face. He tries to keep the movie light and entertaining and the movie never becomes too sentimental or cheesy but he should have avoided all the potty humor. It’s a case of of a lost opportunity as he could have made a great movie. It is these flaws that make the movie just average. It is still worth a watch for Amitabh and being partly good.