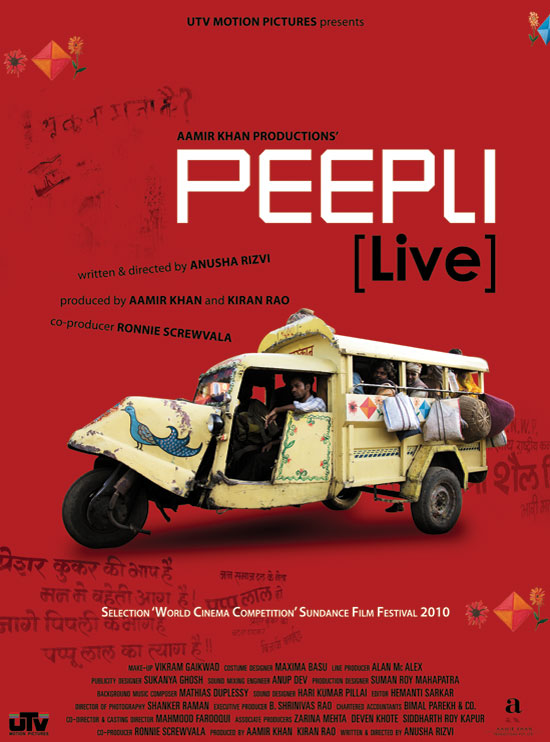 Natha a poor farmer from Peepli village in the heart of rural India is about to lose his plot of land due to an unpaid government loan. When he and his brother meet a politician they are told that the government pays the farmer’s family who committed suicide. His brother cons him to sacrifice his life. Local elections are around the corner and political bigwigs, high-ranking bureaucrats, local henchmen and the ever-zealous media descend upon sleepy Peepli to stake their claim. Will Natha commit suicide? Will he be able to save his land is what the rest of the story is about.

The movie written by Anusha Rizvi seems to be inspired by quite a few movies. A lead character who cannot decide what to do and being used by two different groups for their political gain with neither of them caring for what he wants is from the 1996 movie ‘Citizen Ruth’. The whole media descending upon a small town to cover a story and the carnival with the Ferris wheel and all is from Billy Wilder’s 1951 movie ‘Ace in the Hole’ starring Kirk Douglas. The idea of someone who is about to commit suicide is from the 1941 movie ‘Meet John Doe’. This has already been done in Hindi movies like Hero Hiralal and Main Azaad Hoon which was a copy of Meet John Doe.

Some of the scenes stand out like the one where the elder brother talks his younger one into committing suicide or the scene where Rakesh asks the TV reporter as to why Natha is so important. There is a hilarious scene involving Natha’s feces which shows how low the TV channels can stoop to. The best track in the movie is the Hori Mohato one. Anusha pays a nice homage to Munshi Premchand by naming the character after the lead character of his novel Godaan.

Natha is a pot smoking farmer and seems to be a useless guy. His brother seems no better. Natha’s wife comes off as a shrew. His mother keeps yelling at her daughter-in-law. One never feels any sympathy for any of these characters and one never really cares if Natha dies or lives. Not once do we see Natha or his brother working. Only Natha’s wife seems to be working. By making these people the central protagonists a great disservice is done to the farmer’s suicide issue.

The movie is more of a dig at the media and the politicians. Yes, it is a satire and is meant to make one laugh and think at the same time but if the central protagonists were a hardworking family and if they ran into the same issues the movie would have made more sense. The movie starts off well but it just runs out of steam. It seems that there is not much of a story so we are treated to repetitive scenes of reporters asking dumb questions. The abusive language also seems unnecessary.

Shanker Raman does a good job as the Director of Photography. It is good to see an authentic rustic setting in a Hindi movie after a long time though the camera up Natha’s nostrils is not a pretty sight. Background music by Mathias Duplessy is pretty good. ‘Des Mera’ by the band Indian Ocean is the best song in the movie and is very nicely picturized. The song ‘Sakhi Saiyyan’ is also very good.

Omkar Das Manikpuri is good as Natha but he hardly has any lines to speak. Raghubir Yadav is excellent as always. Shalini Vatsa is very good as Natha’s wife. Farukh Jaffer is good as the old Amma who keeps abusing her daughter-in-law. Nawazuddin Siddiqui is good as Rakesh. Malaika Shenoy is good as the TV reporter in what is clearly a potshot at Barkha Dutt. Vishal O Sharma is excellent as the Hindi reporter in what is clearly a potshot at Deepak Chaurasia. Naseer does not suit the role of a sweet talking politician. The rest of the cast is strictly ok.

Anusha Rizvi’s direction is good in parts. She directs some scenes very well but she does the very thing that she accuses the media and the politicians of. Instead of presenting the story of the poor farmer and his plight we are treated to the sensational coverage done by the TV channels. The whole farmer’s suicide issue is trivialized for petty laughs. The movie is more intent on bashing the media which has become en easy target for everyone from celebrities to the politicians to the common man. What could have been a great movie ends up as an average fare.