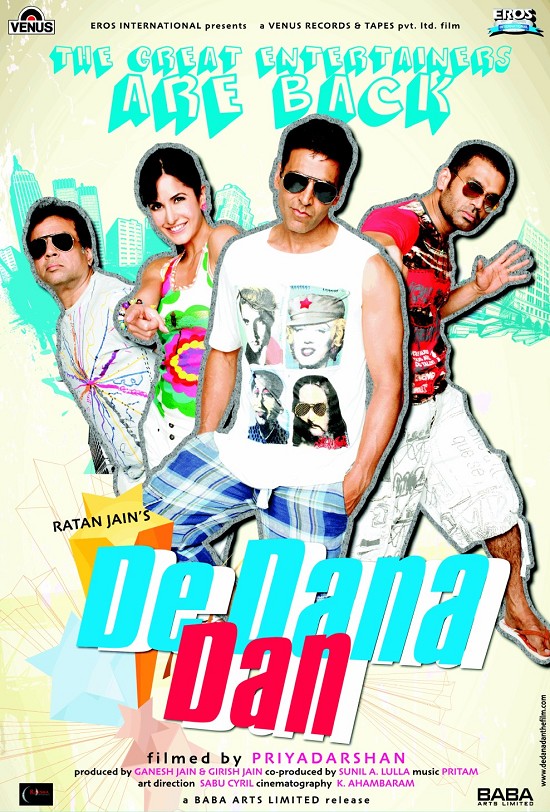 De Dana Dan is shamelessly copied from not one but three movies – Screwed, Blame It on the Bellboy and The Towering Inferno. Nitin (Akshay Kumar) and Ram (Suniel Shetty) are two broke and desperate friends who hit upon an audacious plan – to kidnap Moolchandji – the dog of Nitin’s boss (Archana Puran Singh). But Moolchandji runs away, and the police think it’s Nitin who’s been kidnapped. There are a whole lot of characters which results in mistaken identities, chaos and confusion.

Only a couple of scenes are funny. One is Ram’s rebuke to Nitin after they find out that the dog ran away and another when Nitin blasts Ram for not being a true friend and Nitin’s dialogue about “Dene vala jab bhi deta hai”. Rest of the movie is just screaming and yelling. Everyone screams at the top of their lungs and slap each other and this is supposed to be funny.

Akshay and Sunil Shetty are ok and do display their Hera Pheri chemistry in a couple of scenes but Priyadarshan does not use that. Surprisingly Akshay gets locked up and goes missing in action for a major part of the movie. Katrina Kaif as usual looks pretty but cannot act and thankfully her voice is dubbed. Sameera Reddy has hardly any dialogues except for one lame analogy that she gives. Paresh Rawal and Neha Dhupia are ok. Manoj Joshi and Archana Puran Singh overact as always and just shout. Vikram Gokhale is good but an unusually restrained Johnny Lever is the best.

The Nitin and his boss part is copied from the 2000 movie Screwed starring Norm Macdonald, Dave Chappelle and Danny DeVito. The hotel part is copied from the movie Blame It on the Bellboy and the climax with the flooding is copied from The Towering Inferno. Priyadarshan, who recently won a National Award and who blasted Slumdog Millionaire in interviews, should be ashamed for shamelessly copying from other movies. In spite of borrowing from three movies the end result is a lengthy and loud movie which might give you a headache.