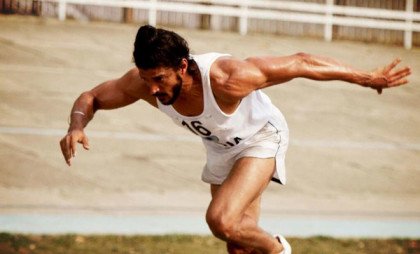 The problem with adoring, reverential portraits of real people is that they tend to lack objectivity and quickly become boring. It’s true of Rang De Basanti director Rakeysh Omprakash Mehra’s Bhaag Milkha Bhaag, an ambitious account of the first 27 years or so of celebrated Indian sprinter Milkha Singh’s roller-coaster life.

Over an exhausting 3 hours and 7 minutes, the film, starring Farhan Akhtar as Milkha, details the athlete’s journey from a boy displaced during Partition to his early years in a gang of petty thieves, followed by his recruitment in the Indian army from where he went on to become a sports hero. All this is revealed in a long flashback by Milkha’s earliest coach, Gurudev Singh (an endearing Pawan Malhotra), during a train journey with Pandit Nehru’s advisor, while pointing out why Milkha has turned down the Prime Minister’s invitation to lead a sports delegation to Pakistan. (The explanation for that decision, painfully obvious to anyone with half a brain, is clumsily used as a suspenseful cliffhanger in the film).

There are moments of great pathos here, and an inspiring lesson on the importance of perseverance and hard work. But it all moves at a snail’s pace, even as the drama of Milkha’s rise on the race track is punctured routinely by too many songs, overlong romantic tracks, and the kind of ‘commercial-movie trappings’ that are counterproductive to a film of this nature.

Biopics, however panoramic in scope, usually boil down to a greatest-hits collection, and Bhaag Milkha Bhaag, for all its sepia-toned flashbacks and terrific training sequences is no exception. It’s a shame Mehra and screenwriter Prasoon Joshi adopt a manipulative, melodramatic approach to highlight Milkha’s achievements and justify his failures. In the film’s opening scene, a key moment in Milkha’s professional career, he loses the lead in the 1960 Rome Olympics when he turns back, apparently because he was haunted by an image from his troubled past. In another scene, where Milkha wins an important race despite being badly injured, Mehra swells the score even as the bandages covering Milkha’s wounds dramatically come off as he inches towards the finish line. And don’t even get me started on the Gadar-esque finale in Pakistan, where Milkha must fulfill the dream of every Indian by beating a rival from our neighboring nation. Never before has slow motion and background music been so abused in a film!

Not everything comes apart though. Shankar-Ehsaan-Loy delivers some great tunes, particularly Zinda that is rendered with suitable energy by Siddharth Mahadevan. Mehra himself stages a rousing middle portion in Ladakh, where Milkha trains tirelessly with the India coach following a disappointment at the 1956 Melbourne Olympics. This montage, gorgeously filmed, is a fine reminder of Farhan Akhtar’s complete submission to the part.

The actor in fact, and his committed performance, is the film’s biggest strength. From his convincing accent and his dialogue delivery to the sheer beast of his physical presence, Farhan is riveting as Milkha. But Joshi’s script, bursting at its seams with too much information that serves little purpose other than to establish Milkha as someone with a wholesome personality, shortchanges Akhtar with the weight of its mawkish melodrama.

Divya Dutta, as Milkha’s doting sister, and the only character in the film who appears to have never aged, hits all the predictable notes. Sonam Kapoor, meanwhile, in a smaller part, as Milkha’s first love, brings a quiet freshness to her scenes.

The film itself is well intentioned and shines a light on an important figure. But it’s too long and too unfocused to leave a lasting impression. I’m going with two-and-a-half out of five for Bhaag Milkha Bhaag. Watch it for Farhan Akhtar’s sincere performance.