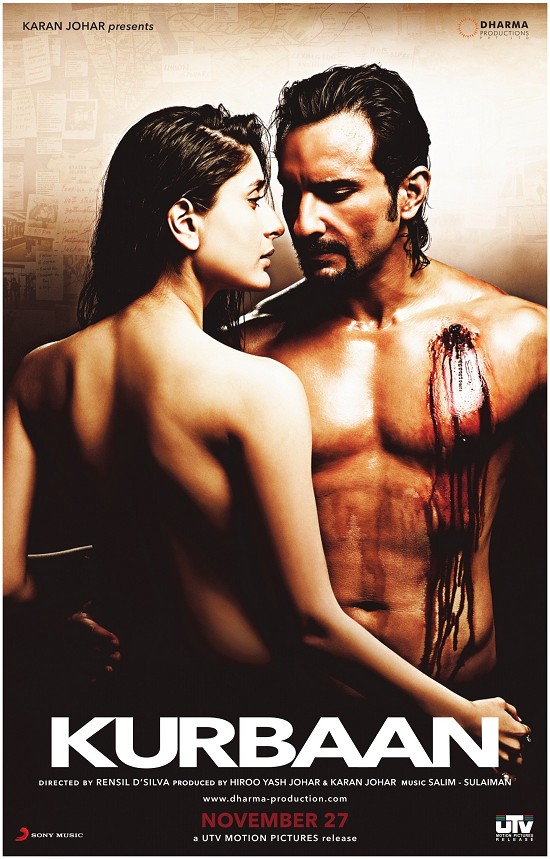 Avantika (Kareena), who came to India because her father had a heart attack, is teaching in a university in Delhi. She meets Ehsaan Khan (Saif Ali Khan), a fellow Professor and falls in love. She receives a call from her university in New York, asking her to come back for the Fall Semester. They get married, buy a house and move into an Indian neighborhood and Ehsan also finds himself a job at the same university. Things change when their conservative neighbors invite them for dinner. She finds out that their neighbors and her husband are terrorists and is placed under house arrest. With the help of Riyaaz (Vivek Oberoi), will she able to stop the next attack is what the rest of the movie is about.

The only scene in the movie that is any good is the one where Avantika finds out that Ehsaan is a terrorist. There are numerous flaws in the movie. Avantika goes back to teach in the US but we never see her work. She is sending off Ehsaan and staying at home even before she is placed under house arrest. She does not call 911 on finding out that there is a bomb on the plane. Riyaaz does not inform the FBI on finding out the same and instead decides to play hero and investigate himself giving stupid justifications that they will lose the lead. Ehsan and Bhaijaan (Om Puri) shoot at Riyaaz on the metro but the train never stops.

The FBI has pictures of Ehsaan and are looking for him and he roams about freely and is teaching at a university. There is mention of Indian neighborhood but suprisingly there are no Hindus. The movie tries to imply that conservative Muslims are terrorists and that Hijab wearing women do not work. It tries to justify terrorism invoking people having being been killed in Iraq and Afghanistan. There is even a dialogue justifying 9/11 when Riyaaz says only 3000 people have died whereas far more died in Iraq and Afghanistan and that wars are because of oil. May be they can explain why there are terrorist attacks in India?

Saif, Kareena and Vivek deliver very good performances despite the silly screenplay and their badly written characters. Saif has started looking old and does not look good doing the early romantic scenes. Om Puri is ok and Kirron Kher for a change is not as loud as usual though her Afghani accent sounds phony. Dia Mirza and Nauheed Cyrusi are decent in bit roles. Music by Salim – Sulaiman is ok with ‘Shukran Allah’ being the best. Thankfully there are no songs with lip syncing or any item numbers.

Story by Karan Johar bears similarities to Arlington Road, Fanaa and New York. Dialogues by Anurag Kashyap and Niranjan Iyengar are mediocre for the most part. Rensil D’Silva’s screenplay is riddled with holes and his direction is just horrible. Some scenes give a sense of deja vu as they are very similar to the ones in New York like Riyaaz being asked to shoot at a guy before his initiation into the sleeper cell, guys being pulled over and one of them panicking. Kurbaan, despite better actors and performances, is boring and makes New York look better.