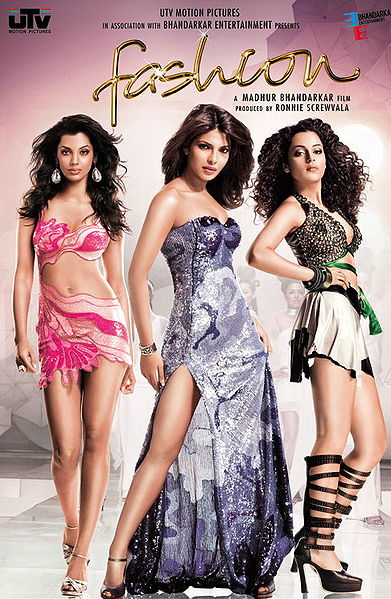 Madhur Bhandarkar is back this time with a movie on the Fashion industry. Its the story of a small town girl Meghna (Priyanka Chopra), her rise, fall and rise again. The movie has a scene in which Madhur Bhandarkar is seen researching for this movie. So we are supposed to think that this movie is realistic but this is no where close. The director needed no research to make this movie. He has just included stories and gossip, whatever was in the news.

Priyanka Chopra’s character is half baked. She has some really stupid dialogues in the movie which are supposed to make her look confident but which come across as her being arrogant. There is no reason why her character behaves differently after she becomes famous. It appears that she is deliberately doing stuff to bring herself down. Priyanka does not look like a supermodel and she gives in a mediocre performance in the leading role.

Kangana Ranaut plays a disturbed character again this time as Shonali after playing disturbed characters in Gangster, Woh Lamhe, Life in a Metro. She seems to specialize in these kind of roles. She is irritating to say the least when she is screaming and crying and saying bastard in her high pitched voice. She should get some credit for her catwalk though. She really looks a supermodel in those scenes.

Madhur Bhandarkar’s Chandni Bar was a brilliant movie because it had a great story in it and the climax was absolutely stunning. Since then all he has done are mediocre movies like Satta, Page 3, Aan- Men at work, Corporate, Traffic Signal and now this. He just changes the context in which the story is set but the result is always the same – mediocre. He needs to come up with a good story rather than just trying to keep making movies about sensational and shocking stuff that happens in different fields.