Student Of The Year Movie Review by Rajeev Masand 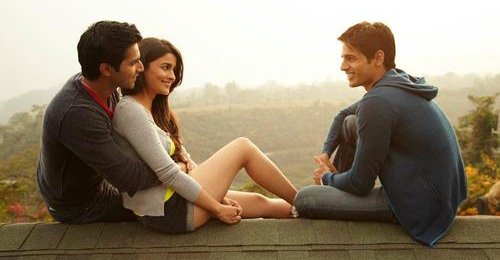 The hardest job on a Karan Johar film set must belong to the cleaners, who I imagine spend most of the day on their knees scrubbing floors, dusting furniture, and basically making sure everything is spotless. The director’s new film, Student of the Year, is set on an impossibly chic campus where good-looking teenagers are invariably breaking into song or breaking into fights. Yet you’ll never spot a carelessly strewn cola can or even a stray sheet of paper lying around in the corridors or in the canteen. Oh those poor cleaners!

At St Teresa High School in Dehradun (think that Riverdale-like setting of Kuch Kuch Hota Hai, only swankier), trust fund brat Rohan (Varun Dhawan) is the coolest kid with all the hottest toys – a flaming red Ferrari, designer togs, and the prettiest girl in school, Shanaya (Alia Bhatt). That is, until Abhimanyu (Sidharth Malhotra) roars in on his bike. He’s the one with modest means – which is relative in a Karan Johar movie, because while Abhi’s family may not have enough makhan for their parathas, he can still afford the brands. After the typical teething troubles, the two boys become fast friends despite their drastically different ambitions.

What tests their friendship is the Student of the Year competition, an annual event devised by the school’s gay dean Yogendra Vashisht (Rishi Kapoor) to pick the one student who will land a full scholarship to an Ivy League college. Typically, however, it’s the girl…or rather their ishq wala love for Shanaya that drives a wedge between the friends.

Unapologetically aspirational, wearing its pedigree on its sleeve, Student of the Year plays out in a Gossip Girl-like universe, where feelings are surface-level and everyone’s a frenemy. The rich kids live it up extravagantly, while the rest (and even their families) aspire for membership into this exclusive club. In Johar’s world, clearly your biggest crime is being poor. This is the kind of world where the rich kid’s obnoxious dad flies half the campus to Thailand on his private jet to attend his son’s marriage.

But it’s also true that Student of the Year doesn’t ask to be taken seriously. This is Johar’s “holiday movie”; intended to show you a good time. So you have Glee-style introductions to the three leads in snazzily choreographed set pieces, a soundtrack of bubblegum hits, crisply edited sporting sequences, and outrageous humor like a track involving the dean’s crush on a strapping (and married) football coach.

Johar’s secondary players may come off as stereotypes on paper – the rich kid’s chamcha, the heroine’s nerdy best friend, the fat boy everyone makes fun of, and the opportunistic girl who makes a play for someone else’s boyfriend – but more than likely you’ll find traces of yourself or your friends in each of them. And therein lies the film’s secret weapon – look beyond the shiny classrooms and the sun-kissed Thai beaches, the brightly lit song sequences and the repeated shirtless shots of our heroes…and there’s heart to be found, particularly in the film’s second half when Rohan and Abhi truly lean on each other.

Karan Johar displays his trademark flair for light-hearted laughs and prettified emotions, capturing a world he knows inside out. This is the most extravagant launch any newcomer could have asked for. Good for them, Johar doesn’t know how to do things small.

The debutants, in turn, put their best foot forward: Sidharth Malhotra is earnest and has a pleasing presence, while Alia Bhatt is cute as the clueless Shanaya, if a little raw. It’s Varun Dhawan who stands out with a confident, charming turn, able to tackle both comical and vulnerable scenes with ease. Yet if there’s a performance that glues together this film, it’s Rishi Kapoor’s. He never flinches in an unusual role, playing the part for laughs yet also infusing soul into what could have so easily turned into a caricature.

Too long by about twenty minutes, the film could’ve done with some tightening – perhaps the clunky treasure hunt sequence could go? Nitpickings aside, this is a breezy, enjoyable film by a director who knows his craft.

I’m going with three out of five for Karan Johar’s Student of the Year. If fun is what you’re seeking, you won’t be disappointed.