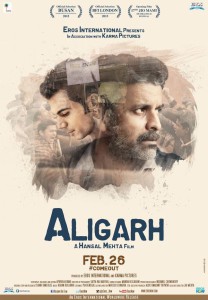 Synopsis
Aligarh is based on the heartbreaking and powerful story of Professor Siras, a prolific teacher who faced abject humiliation and persecution at the hands of university authorities and other citizens for being gay. On February 8th 2010, a crew from a local TV station secretly filmed Professor Shrinivas Ramchandra Siras of Aligarh Muslim University (AMU) having sex with a rickshaw puller in his house inside the university campus. The video led to condemnation by conservative religious groups and the university administration suspended him and asked him to leave the campus. He was found dead in his apartment two months later.

The story by Ishani Banerjee and screenplay by Apurva Asrani stays pretty true to the actual story though there are a few cinematic liberties taken. The real Deepu Sebastian had phone conversations with Professor Siras but he never met him in real life except after he was dead. Siras never met his lawyer and he was in touch only through emails so the court deposition did not happen in real life.

Manoj Bajpayee is excellent as Professor Siras and he conveys every emotion that Professor Siras could have felt whether it be his gentleness or loneliness or frustration or humiliation or helplessness. Rajkummar Rao is good as usual as the reporter Deepu Sebastian but his Malayam accented Hindi came across only in a couple of scenes. Ashish Vidyarthi is very good as the lawyer Anand Grover. Balaji Gauri is excellent as Nita Grewal, the female lawyer. Suman Vaidya is very good as the PRO Shadab Qureshi. Sukhesh Arora is good as Professor Tahir Aslam.

Hansal Mehta’s direction is excellent and he handles the subject with extreme sensitivity. The movie shows how horrible life can be for a gay person in India having to face humiliation, ostracism and persecution. The movie effectively captures the regressive homophobic attitude of the Muslim officials of the Aligarh Muslim University who think a consensual act within one’s own home outrages the morality of Aligarh “Muslim” University. Some may feel that the movie is slow paced but the subject of a lonely Professor required those scenes of silences and lonely moments. Aligarh is definitely the best movie of the year so far.