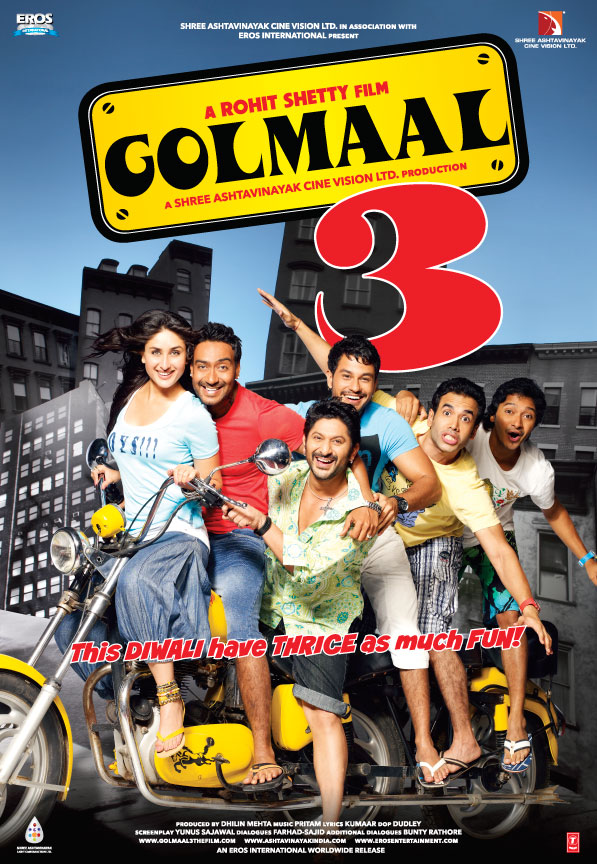 Pritam (Mithun), a bus driver, is a father of Madhav (Arshad Warsi), Laxman (Kunal Khemu) and Lucky (Tushar Kapoor). Geeta (Ratna Pathak) is the mother of Gopal (Ajay Devgan) and Laxman (Shreyas Talpade). Pritam and Geeta were erstwhile lovers who could not marry. Daboo (Kareena Kapoor) gets them married by telling each pair of siblings that the other pair of siblings is little kids. There is hatred between two bunches of siblings within a family until they find out a shocking truth. What happens next is what the rest of the story is about.

Screenplay by Yunus Sajawal borrows plot from the sweet comedy Khatta Meetha (Ashok Kumar, Pearl Padamsee, Rakesh Roshan, Bindiya Goswami) and turns it into slapstick. Much like Khatta Meetha, the two sets of siblings are forced to live under one roof after the marriage of their respective parents and can’t stand each other.

Some of the scenes are funny like the one Madhav asks his father why he does not give examples of sons who are murderers and rapists when his father gives examples of or the sons who are doing well or the scene where Puppy (Johny Lever), who has short term memory loss, keeps forgetting every few minutes while being chased by the cops or the scenes where Laxman (Tusshar) is angry at Gopal but is afraid of pointing a finger at him because of Gopal’s propensity to break fingers or the scene where a mad Gopal asks Daboo and others whether he ever gets mad.

The funniest scene of the movie is the flashback where Pritam disco dances and clashes with Geeta’s father (Prem Chopra). The set, background music is all perfect in sync with the old Hindi movies. Mithun referencing his older movies to explain what all he did to earn money is funny.

Most of the movie is pure nonsense. There is way too much of physical comedy. Shreyas stammering on alphabets which can be misconstrued for abuses is initially funny but after a while gets irritating. Tushar Kapoor’s mute antics are not funny at all and quite annoying. There is an extended emotional scene where Tushar reveals the secret to all which is unintentionally funny. The scene with Mithun and the dog is not funny at all and seems quite disrespectful to a veteran actor like Mithun.
Except for a few dialogues most of the dialogues by Farhad – Sajid are PJs – poor jokes. Cinematography by Dudley is good in the retro bits. Music by Pritam is ok . The title song and the song ‘Ale Ab Jo Bhi Ho’ are decent. Background music is good in the retro bit.

Ajay Devgan acts well as the mad Gopal who has an obsession to break fingers that are pointed in his face. Kareena is ok though she gets a bit irritating when she is talking to the camera. Arshad is funny in a few scenes and Kunal Khemu is good in a couple of scenes. Shreyas and Tusshar are irritating. Mithun is great in the retro bits where he sportingly spoofs himself. Ratna Pathak is ok. Johnny Lever is hilarious and Sanjay Mishra is good. Prem Chopra is great in the only scene that he has.

Rohit Shetty returns back with what he does usually – a nonsensical comedy with spoofs, car chases, flying cars and slapstick. He manages to make one laugh in a few scenes especially in the retro spoof. But the movie is not as funny as the first Golmaal was or All the Best – both of which were nonsensical too. In spite of borrowing from such a good movie as Khatta Meetha (1978), he fails to keep one entertained. It gets tiring with repetitive scenes of mute antics, stammer jokes and physical comedy. The movie is recommended only for those who can stand all this annoying stuff for a few laughs.