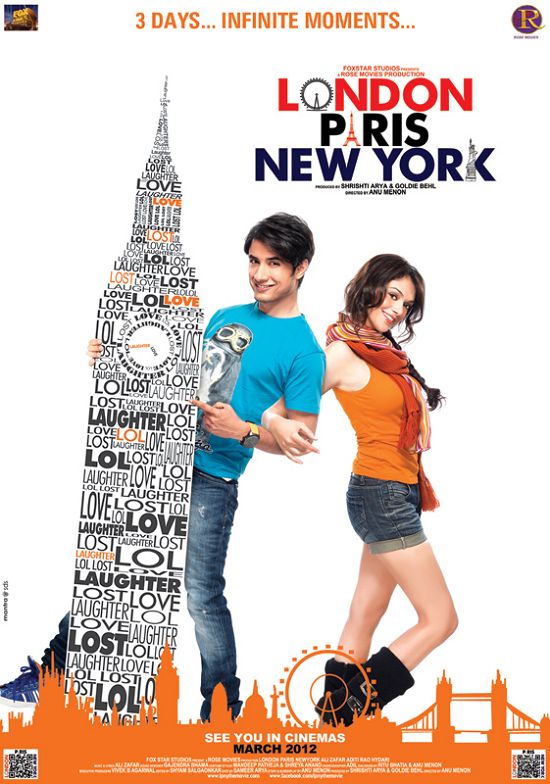 This week’s new film LONDON PARIS NEW YORK is a film that lacks pace at times, though it’s entertaining for the remaining part. The film focuses too much on the witty conversation between the leads, but when it comes to drama everything falls in place too easily without any clutches which becomes difficult to gallop for the viewers. But not entirely clichéd, this film offers some good laughs and also has a good storyteller in the form of director.

The first half is completely shot in London, if not for one take in Paris before the intermission. The contact between the lead happens quite conventionally but thankfully its believable. The film continues with string of jokes by Ali Zafar’s character. The humor is not exactly smart but it does help to make his role believable. The first half has glitches because there is hardly any movement in the story. The jokes are funny but then between one jokes to another, the film misses the catch.

It does take time to establish its premise, and hence the second half oozes speedily. The Paris episode brings some story and drama finally and there on, the film manages to keep you attentive in its proceedings. Also the break-down of Ali Zafar is undoubtedly the best scene among the lot. That scene in particular if had failed; the film would have lost everything which it had in its next reels. It’s a poignant sequence and director succeeds to execute it very well.

It’s a token of thanks to cinematographer who gifts us outstanding locales of London and Paris. The New York locations may have been seen before, but the rest two are amazingly shot. Ali Zafar’s music is good and maintains good feel as well.

It’s Ali Zafar who potentates the show all the way. He is the best thing about this decent flick. He injects energy in every scene and he enjoys himself in front of camera. It’s a wonderful act! Aditi Rao Hydari looks gorgeous in each frame, and has a complex role to take on. She does very well overall. She plays her innocent character in London with charming presence and maintains terrific spirit in the bold role of Paris and finally comes as a revelation in New York with her subtle face. The chemistry is gelled well, but had the story been convincing in initial portions, the film would have been more within the positive bar.

The director has good command on youth relationships and he executes this silly plot in very restrained mannerisms and manages to make an honest attempt. It’s a feel-good film. Despite of few downers, LONDON PARIS NEW YORK is likeable.