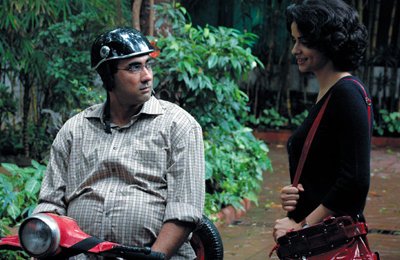 There’s an interesting idea buried somewhere under those layers of flab in director Rajat Kapoor’s Fatso. But it’s a pity the film’s fantastical premise isn’t mined for enough laughs…

Naveen (Purab Kohli) has popped the question to his girlfriend Nandini (Gul Panag). Soon after, he’s killed in a road accident that was meant to claim the life of his obese friend Sudeep (Ranvir Shorey). Distraught on discovering that he was yanked out before his time, Naveen appeals to the emotions of a peon in the bureaucratic afterlife, and is sent back into the world, but in Sudeep’s body.

The film’s best bit is its portrait of the afterlife as a typical government office, packed with lazy clerks and dissatisfied ‘customers’. But director Rajat Kapoor races through these clever scenes, choosing instead to focus on the characters and the situation in the real world. Unwisely he gives too much screen-time to a tasteless subplot about a third friend (Neil Bhoopalam) who reveals his feelings for Nandini almost immediately after Naveen’s death. These portions only distract from the film’s core conflict and add to its running time.

It’s Ranvir Shorey alone who emerges the saving grace of Fatso, delivering a fine, vulnerable performance that never slips into caricature. Even when the film loses steam and the script lets him down, it’s only Shorey who holds your attention as the pudgy underdog hero.

In the end, Fatso never exploits its full potential, and opts for a far-too-convenient resolution. I’m going with two out of five for director Rajat Kapoor’s Fatso. Enjoyable only in bits.