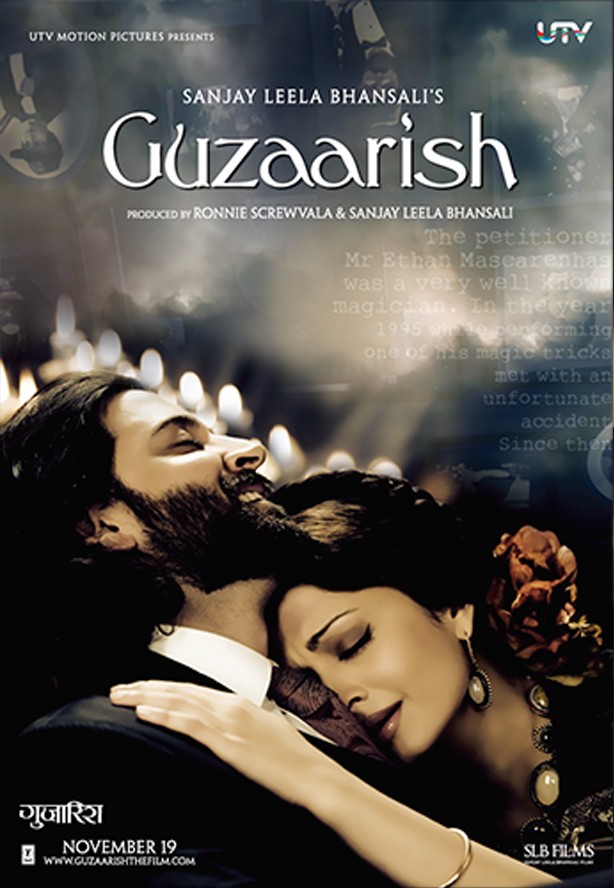 Ethan Mascarenhas, a quadriplegic, hosts a Radio Show that spreads hope and laughter. He was once the greatest magician of the world but is now taken care of by his Nurse, Sofia D’Souza. On the fourteenth anniversary of his accident, Ethan decides to petition the Court for euthanasia. A young man named Omar Siddiqui bursts into Ethan’s world with a single-minded desire to learn magic from the very best. While on one hand Ethan passes on his magical legacy, on the other, he fights tooth-and-nail to demand the most basic right that every human being is entitled to – the right to his own life. What happens next is what the rest of the story is about.

Screenplay is credited to Sanjay Leela Bhansali and Bhavani Iyer. The movie owes its plot and characterization to Whose Life is s it Anyway? (1981) and Mar Adentro aka The Sea Inside (2004). Not only the plot but many of the scenes as well as dialogues are plagiarized from these movies.

Hrithik’s look as well as character is pretty similar to Richard Dreyfus’s character Ken Harrison. He cracks sex jokes with his nurses and so does Hrithik. Ken Harrison asks his doctor if he will be ever able to walk, move his fingers and toes and the dialogue is literally translated in Guzaarish. Ken falls off his bed when the nurse is trying to set up his pillow and so does Ethan when Omar tries to do the same. Ken is forcibly given an injection when he refuses to take the medicine just as Ethan. Ken asks his girlfriend to go away and marry someone else much like Ethan does. The court conducts the hearing in the hospital similar to the court conducting the hearing in Ethan’s house. Now there is a dialogue which goes “Aaakhir Yeh Zindagi Hai Kis Ki” which literally translates to “Whose Life is it Anyway?” during the court scene. It’s probably SLB’s way of crediting the original.

Mar Adentro (The Sea Inside) is a Spanish film which won the 2004 Oscar for Best Foreign Language Film and was based on a true story. Sam has written a book just like Ethan. Sam uses a long pen in mouth and whistles to call and is in an upstairs room with a window – just like Ethan. Sam files the euthanasia petition after 28 years and here it is 14 years. While Sam was being taken care of his family here he is taken care of by his nurse. Scenes of Sam being driven to the court, the media asking him questions and the court declining to even hear him are similar. The way they get injured is similar too. Sam is abused similar to Ethan. Sam feels helpless when his lawyer Julia falls off and here Ethan is helpless when Sophia is being beaten up by her husband. Rosa offers to kill Sam just like Sofia does in Guzaarish.

Just like SLB’s previous movies, the movie is set in some La La Land even though it is mentioned as Goa. Most of the movie is shot on sets. Ethan lives in what looks like some castle with high ceilings and columns. One has to even take a boat ride to reach him. Sophie (Aishwarya) dresses in Victorian gowns. The restaurant that they go to looks like from some old B&W movie. SLB continues his fetish with the Black and Blue colors. Most of the movie is in dark rooms and Ethan’s room has blue walls. The movie starts off with the Nat King Cole song ‘Smile’. Most of the dialogues are in English and Ethan and his mom sing ‘What a Wonderful World’.

The movie begins with Sophie taking care of Ethan and she is washing his hair while he is ridiculously hoisted up in a sling. This scene could be good material for spoofs. Ethan uses an automatic wheel chair in the very first scene but in the rest of the movie he is being wheeled in a manual chair. Ethan hosts a live radio show from his home (not sure if this is even possible) and the caller scenes are so cheesy. It seems odd that they do not have a torch light or an emergency light but use candles when the power goes off. The court scenes are outright silly and the sudden appearance and disappearance of Sophie’s husband is ridiculous. The sudden appearance of Ethan’s mom and her excuse for not being there to take care of Ethan sounds implausible. Then there is the melodramatic scene of her death. The ending after all the brouhaha is outright silly.

Cinematography by Sudeep Chatterjee is good but most of it is in dark settings. Even the courtroom scenes are in smoke filled rooms. Songs with the exception of “Udi Udi” which is sung very well by Sunidhi Chauhan are plain boring and mediocre with pedestrian lyrics by Vibhu Puri. “Udi Udi” is somewhat marred by the overacting Aishwarya playing musical instruments in air.

Hrithik puts in a lot of effort but he is over the top as characters usually are in SLB’s films. He is not consistent and copies Richard Dreyfus, Javier Bardem, Daniel Day Lewis and even Al Pacino. He even does his mentally retarded bit from Koi Mil Gaya at places. His constant laughing and smiling makes him look like a retard. Aishwarya Rai is dressed in cleavage revealing dresses and wears gaudy make up and dark red lipstick that could put a prostitute to shame. Her face looks bloated and she overacts as usual. Monikangana Dutta hardly has any role and has one line to speak and it looks like she is reading off a teleprompter. Aditya Roy Kapoor’ seems to have wandered off from the sets of Action Replayy. Shernaz Patel has weird expressions on her face and is horrible. Suhel Seth is ok.

Sanjay Leela Bhansali’s first Khamoshi – The Musical borrowed from Gulzar’s Koshish. Hum Dil De Chuke Sanam was a rehash of Woh Saat Din and the Mani Ratnam directed Mouna Raagam. Devdas was a remake of the old Devdas. Black plagiarized not only the plot (tried to get away saying it is based on Helen Keller) but also scenes with dialogues from The Miracle Worker. Saawariya did credit White Knights. Not a single of them is original and the common thing is that SLB rehashes them with lavish sets, over the top acting and melodrama. Sanjay Leela Bhansali takes a beautiful movie like Mar Adentro and a grim movie like Whose Life is it Anyway? and creates a fantasy by setting it in his dream land. The movie fails to bring in the dignity of a Sam (Mar Adentro) or the frustration of a Ken (Whose Life is it Anyway?). Yes it’s better than Saawariya but that is not saying much as the movie is still horrible.