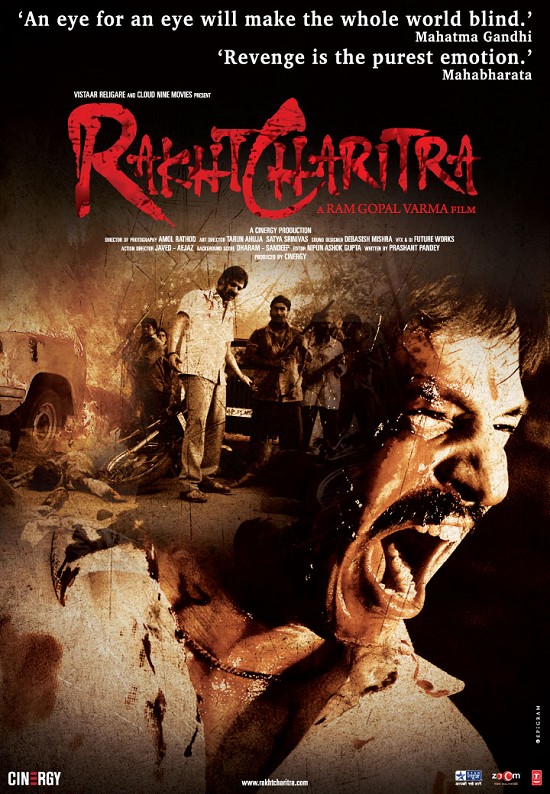 Rakht Charitra is based on the life of Paritala Ravi and the faction based wars in the Rayalaseema region of Andhra Pradesh. After his father Veera Bhadra is murdered, Pratap Ravi (Vivek Oberoi) returns to Anandapur. Once his elder brother (Sushant Singh) who was plotting revenge is also killed Pratap vows vengeance. Once he eliminates the masterminds of the crime there is an all out war between Pratap and Bukka Reddy (Abhimanyu Singh). Shivaji (Shatrughan Sinha), an actor turned politician, offers Pratap a chance to join politics. Pratap takes up on the offer and the rest of the movie is the rise of Pratap and his battle with Bukka Reddy.

There is an irritating voice over which constantly tells us about the characters and what happened next. Not sure why this horrible voice was used and why it was used throughout the movie. The narration comes off across as some grandma telling a story to little kids with a lot of hyperbole. Just because the movie is named Rakht Charita every five minutes there is a dialogue which uses the word ‘Rakht’. Not to mention the constant playing of the title song ‘Rakht Charitra’ in every other scene.

There are also the now standard RGV weird camera angles. The movie also can’t stop with the Godfather references – son studying and taking up crime to avenge family killings, listening to the poor person’s horror story and Sivaji telling Pratap that he is not ‘Sarkar’ but ‘Super Sarkar’. It seems odd that Ashish Vidyarthi roams around eating ‘Mum Phali’ after having killed someone.

The movie is written by Prashant Pandey and there are lots of changes with respect to the actual incidents. A few of dialogues are good but most of the dialogues are pathetic. Cinematography by Amol Rathod is good when there are no weird camera angles. The good thing is that some of the scenes seem like they are shot on real locations. Music is by multiple composers but the result is the same. All the songs are loud and seem like cacophony. The title song which plays frequently is annoying. There is an unnecessary song ‘Paisewala’ with cameo by the singer Sukhvinder himself . Background music is bad except for a couple of scenes.

Vivek Oberoi doesn’t fit that well in the initial scenes but once he turns into a politician he looks really good. He is great in a few scenes like the one where he surrenders his weapon or the scene where he addresses all the goons at his house. Abhimanyu Singh is brilliant as Bukka Reddy and steals the show. His role may be one dimensional but he absolutely revels in it. There are scenes where he conveys his menace just through his looks and mannerisms without saying a word. Shatrughan Singh is good in a cameo as Shivaji which is basically a caricature of the late N. T. Rama Rao. He has some good dialogues and some cheesy ones but he manages to act well. Radhika Apte is decent as Nandini. Zarina Wahab is good as Pratap’s mother. Ashwini Kalsekar is excellent as the cop. Kota Srinivasa Rao is decent.

Ram Gopal Varma messes up what could have been a masterpiece. He had great material at hand but his obsession with loud music, weird camera angles and hyperbole mars this. Some scenes are really good and remind you of scenes from RGV’s earlier movies like Shiva, Gayam and Satya. Yes, the movie is based on true incidents and the violence depicted is based on real violence but the objective here seems only to celebrate and glorify violence. It feels RGV just wants to show new ways of killing people making it feel like the movie ‘Saw’. The movie is recommended for only those who can stomach the excessive violence and who do not mind the usual RGV gimmicks like loud music and weird camera angles.