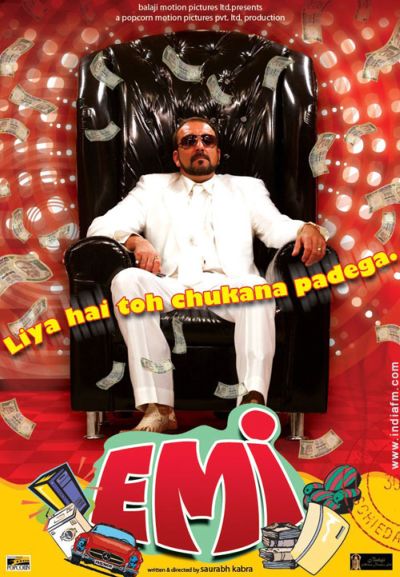 EMI is the story of four loan defaulters and how they are helped by Sattar Bhai (Sanjay Dutt).The first half shows Arjun Rampal, a DJ, who has no qualms borrowin money. He is a smart ass who sweet talks his way out of trouble. Urmila is a widow who wants to fraud the insurance company. Ashish Chaudhary and Neha Uberoi are the couple who are trying to get a divorce after having loaned money for a house, car and a laptop. Kulbushan Kharbanda is the father of an confused son who does’nt know what to do with his life. Sanjay Dutt is Sattar Bhai, head of a loan recovery agency who wants to get into politics.

Some scenes and dialogues especially the loan calls, the loan agent scenes with Ashish Chaudhary and Kulbushan Kharbanda are funny but those are few and far in between.

Ashish Chaudhary and Neha Uberoi track is a little interesting and Arjun Ramphal’s character is funny. Neha Oberoi acts wells and Urmila is wasted in a inconsequential role. Snehal Dabhi as Mumbhai Central is funny. Sanjay Dutt’s role is just an extension of his Munnabhai role with those trademark dialogues.

The director should have probably developed more on the Sanjay Urmila track. The makers of this movie probably took out a loan and defaulted on the EMI. So they had to end the movie abruptly with a song.