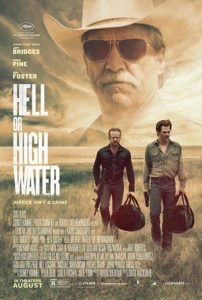 Toby is a divorced father who’s trying to make a better life for his son. His brother Tanner is an ex-convict with a short temper and a loose trigger finger. Together, they plan a series of heists against the bank that’s about to foreclose on their family ranch. Standing in their way is Marcus, a Texas Ranger who’s only weeks away from retirement. As the siblings plot their final robbery, they must also prepare for a showdown with a crafty lawman who’s not ready to ride off into the sunset.

Screenplay by Taylor Sheridan is very good. There are some great lines like “I’ve been poor my whole life, like a disease passing from generation to generation. But not my boys, not anymore.” or “You’re people did too. A long time ago your ancestors was the indians until someone came along and killed them. Broke em down made you into one of them. 150 years ago all this was my ancestors land. Everything you could see, everything you saw yesterday. Until the grandparents of these folks took it. Now it’s been taken from them. Cept it ain’t no army doin’ it, it’s those sons of bitches right there.”

Jeff Bridges was excellent as the cop Marcus and was nominated for an Oscar for Best Supporting Actor. Marcus playfully making fun of his fellow cop’s Native American and Mexican heritage was very funny. Chris Pine was very good as Toby. Ben Foster was good as his brother Tanner. The relationship between the brothers is depicted very well too. Gil Birmingham was good as the cop Alberto.