Movies You Watched This Month February 2016 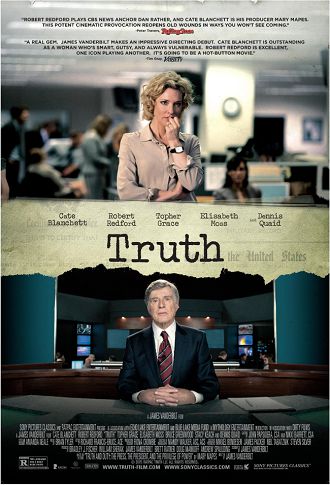 Official Synopsis
60 Minutes II had aired an investigative report, produced by Mapes and reported on-air by Rather, that purported to reveal new evidence proving that President George W. Bush had possibly shirked his duty during his service as a Texas Air National Guard pilot from 1968 to 1974. But within days after the story broke, George W. Bush’s military service record was no longer the focus of media and public scrutiny. Instead, it was 60 Minutes, Mapes, and Rather who were under question: the documents supporting their investigation were denounced as forgeries, and the 60 Minutes staff was accused of shoddy journalism or, perhaps worse, accused of being duped. Eventually, Mapes would lose her job and reputation. Dan Rather would step down prematurely as CBS News anchor. How did attention end up focused on the journalists who questioned the official version of the story? How did the minutiae of document typefaces, line breaks, and superscripts become seemingly more important to the national discourse than the question of whether the President had failed to fulfill his military obligations? Have journalistic integrity and independence been fundamentally altered in today’s newsrooms and boardrooms? TRUTH is based on Mary Mapes’ memoir Truth and Duty: The Press, the President, and the Privilege of Power.

The movie is based on the Rathergate incident and is Mary Mapes version of what happened. Now people either believe that the report was true or not based on their political leanings.

Here is a very critical piece on the movie which says that Mary Mapes got fooled but that she is still insisting that she was right and indulging in conspiracy theories.

Here are a couple of positive pieces on Mary Mapes and the movie.

The Dark Truth in the Movie ‘Truth’

The Flawed Report on Dan Rather

Cate Blanchett is excellent as Mary Mapes, the producer at CBS News who won a Peabody Award in 2005 for producing the CBS News segment that broke the Abu Ghraib Iraq military prison abuse story. Robert Redford is very good as Dan Rather, the anchor of CBS Evening News for 24 years. Topher Grace is good as Mike Smith, the freelance journalist and researcher. Elisabeth Moss is good as Lucy Scott, the journalism professor and freelance researcher who worked as an associate producer on the Bush-Guard story. Dennis Quaid is good as Lt. Colonel Roger Charles, who worked with CBS News as a military consultant and investigator. Bruce Greenwood is very good as Andrew Heyward who was then the President of CBS News. Rachael Blake is very good as Betsy West the then senior vice president at CBS News.

The movie is ok until the telecast of the report but it gets very interesting and engrossing once the report starts getting questioned. Suddenly the sources start backtracking and the person who provided the Kilian documents admits he lied about how he got them. The movie is a good movie on journalism whether one agrees with Mary Mapes or not.