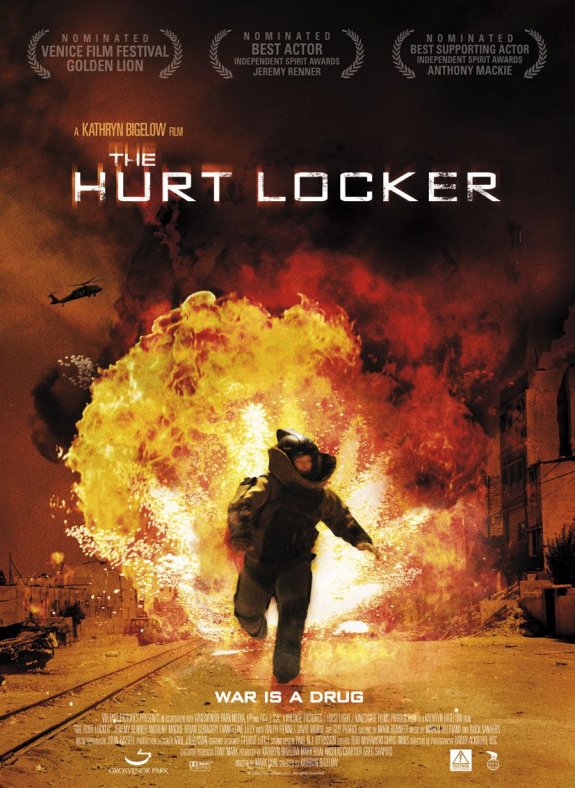 When Staff Sergeant William James (Jeremy Renner) takes over the team, Sergeant J.T. Sanborn (Anthony Mackie) and Specialist Owen Eldridge (Brian Geraghty ) are shocked by what seems like his reckless disregard for military protocol and basic safety measures. As the fiery chaos of Baghdad threatens to engulf them, the men struggle to understand and contain their mercurial new leader long enough for them to make it home. They have only 38 days left in their tour, but with each new mission comes another deadly encounter, and as James blurs the line between bravery and bravado, it seems only a matter of time before disaster strikes.

Jeremy Renner is excellent in the role of Sergeant William James and was nominated for an Oscar for Best Actor. Anthony Mackie as the orthodox, protocol following Sanborn and Brian Geraghty as the pessimistic Eldridge give excellent performances. Guy Pearce and Ralph Fiennes are good in cameos. The kid who plays Beckam and the civilian strapped with the time bomb are excellent too. The rest of the cast give decent performances.

Kathryn Bigelow’s direction is excellent. The movie is intense and one can feel the tension as James goes about defusing the bombs. Kathryn Bigelow succeeds in not only showing how dangerous the squad’s job is but in also showing the effects on their psyche. The Hurt Locker is the best movie of the year 2009. It was nominated for 9 Academy Awards and won 6 including Best Picture, Directing, Original Screenplay, Editing, Sound Editing and Sound Mixing.