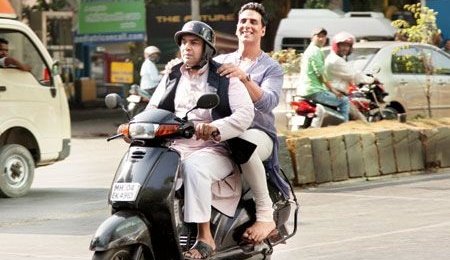 Oh My God!, adapted from the popular Gujarati play Kanji Viruddh Kanji (itself evidently inspired by the Australian film, The Man Who Sued God), makes a compelling argument against the commercialization of religion, but the tone of the film is so shrill, the approach so preachy, you feel like you’re being tied down and forced to listen to a sermon for two-and-a-half hours.

Paresh Rawal stars as Kanjibhai Mehta, an antique-store owner in Chor Bazaar, who doesn’t believe in God, but has no qualms exploiting those who do. In an opening scene, he shrewdly manipulates a rich Rajasthani seth into parting with his expensive jewelry in exchange for a religious idol he acquired at a bargain basement price.

When his is the only shop that’s destroyed in an earthquake, Kanjibhai claims insurance for the damage, but is shooed away on the grounds that he isn’t covered against accidents caused by ‘an act of God’. Desperate and bankrupt, Kanjibhai sues both God and the insurance company, insistent that one or the other must compensate him. In court, as he goes about systematically and logically questioning the very existence of God, he’s confronted by an assorted bunch of sadhus,maulvis, priests, and holy men – including an effete swaami played by Mithun Chakraborty – who huff and puff and flare their nostrils each time he refers to them as God’s “salesmen” and to religion as their “dhanda”.

Along the way he finds an unlikely ally in his new houseguest, a perpetually smiling gentleman named Krishna Vasudev Yadav (played by Akshay Kumar), a modern day incarnation of Lord Krishna himself, who arrives from the skies on a swanky motorbike, and proceeds to guide Kanjibhai in this bizarre legal battle.

Despite its unusual, catchy premise, Oh My God!, co-written and directed by first-timer Umesh Shukla (who directed the Hindi version of the play that also starred Rawal in the lead), never exploits its full potential. While the film makes a solid case against blind faith, the excesses of religious rituals, and the self-appointed “collection agents” of God, it never sticks its neck out far enough, choosing instead to go with a cop-out ending, as if afraid to be too provocative. What’s more the film can’t shake off its stage-play feel, and suffers from some embarrassingly hammy acting from supporting players like Govind Namdeo, who plays an easily angered godman who’s at the end of his patience.

Still there’s much to enjoy here, including many of the witty dialogues, and particularly Paresh Rawal’s robust performance as the stubborn non-believer on a determined mission. Akshay Kumar, shot mostly in soft focus, a bright glow emanating from his mug, postures and preens throughout, allowing his co-star to do all the heavy lifting here.

In a sea of dumb Bollywood comedies (many starring Akshay Kumar himself), this one at least starts off a debate. For that alone, it’s not entirely a write-off. I’m going with two out of five for Oh My God!. Carry cotton for your ears to drown out all the shouting!