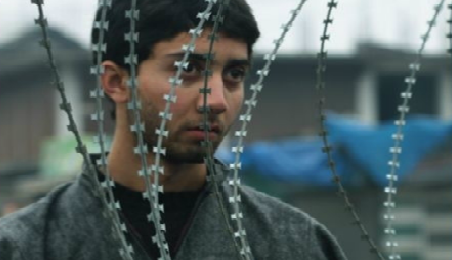 Unlike so many Hindi films about the Kashmir situation, Harud, directed by Aamir Bashir is subtle and understated, and unfolds at a quiet, unhurried pace despite the urgency of the themes it addresses. So quiet and so slow, in fact, that more than once during the film you might find yourself checking your watch to make sure time hasn’t stopped still.

Beautifully filmed (by cinematographer Shankar Raman) against a war-torn landscape, Harud tells the story of a Kashmiri family that has lost its son. Along with his aged parents, Rafiq, played by Shanawaz Bhat, is struggling to come to terms with the sudden disappearance of his older brother. Like thousands of young men who’ve gone missing since the military insurgence, Rafiq’s brother is untraceable.

After an unsuccessful attempt to cross the border into Pakistan to become a militant, Rafiq returns home to a futile, aimless existence. He watches helplessly as his father begins to lose his mind, and his mother is trapped in denial about the circumstances that surround them.

Performed remarkably by Iranian actor Reza Naji as the father slowly succumbing to dementia, and particularly by Bhat, who whose soft, expressionless face never betrays Rafiq’s inner devastation, Harud is an intensely personal film that benefits considerably from its minimalist dialogue and mostly barren soundtrack. Clearly wanting you to get a real sense of his characters’ lives, director Aamir Bashir uses long silences, occasionally repetitive shots, and that meditative pace to make his point.

Not all of it works at all times. It’s hard to sometimes tell between Rafiq’s dreams and reality, and given that this is ultimately a film, too many characters come off as too passive to invest in. Yet, the film has an honest, aching beauty that’s irresistible despite its bumps.

I’m going with three out of five for Aamir Bashir’s Harud (it means autumn in Kashmiri). This is an important, delicate film that asks a lot from its audience. Turn off your cell-phone and submit yourself to it; you won’t be disappointed.